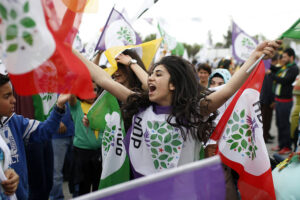 This week, 20 members and old HDP’s Executive Board members were taken into custody, and they are expected to face several years in prison for their democratic and political activities. For those who are not fast enough to follow the anti-democratic rule in Turkey, this article will present a landscape of the last 5 years to give meaning to the severe attacks of the government on HDK and HDP, a political party with significant representation in the parliament.

HDP is a radical democratic political party of Peoples’ Democratic Congress (HDK) composed of many members and 5 socialist or radical democratic political parties. It has an autonomous Women’s Assembly and Youth Assembly that strengthens the youth and women during the political action and decision making processes. While HDP is known to be a ‘pro-Kurdish party’, it is the peoples’ party, includes all local nationalities in Turkey and currently represents Kurds, Turks, Armenians, Arabs, Yezidis, and Assyrians. HDP was founded during the negotiations for the peace process between PKK and the Turkish state and took an important role during the negotiations and to organize a political and social demand for peace in Turkey. The actions and the policies of HDP during the negotiations for the peace process were from a radical democratic perspective. This means that the resolution of the conflict was more than about the two sides of the war. Rather, the resolution and peace require the inclusion of the resolution of the patriarchy, the precarity of the working class, the hegemony of the religious groups, the ecological destruction, and necessitates the decentralization of the social and political decision making, broadening of the authority of the municipalities according to the European Charter of the Local Self Government.

During the peace process negotiations, social and democratic demands increased. The conditions of the democratic and political rights were ameliorated. Many important protests like the Gezi Parkı Resistance, ecological resistances, resistance against the construction of Kalekols (military fortresses built on top of the mountains, digs tunnels within the mountains to contain heavy armoury and surveys the provinces) in Turkey proliferated during the negotiations for the peace process. Meanwhile, the revolutionary struggle in the Middle East arose; the Rojava Revolution was taking place and was witnessed by the whole world, giving hope to the peoples of the Middle East.

In such an atmosphere, the foundational understanding of the centralized, oppressive, monistic Turkey ideology was under the questioning of the peoples and the citizens as individuals. From economic crisis to war, all unsatisfactory aspects of the country were quickly criticized and protested by the citizens. The tools of oppression, monistic understanding, and existing centralized governance were not taken for granted, even mocked and understood to be unnecessary by the masses. In 2014, ISIS was a paralyzing fear for many peoples of the Middle East, and the resistance in Rojava against ISIS was a source of hope for the new life in Turkey. Even though it was known that ISIS was organizing in Turkey, the Rojava resistance was the buffer zone between ISIS brutality and Turkey. While the resistance in Kobane was ongoing, the AKP government was ceaselessly making statements against the resistance against ISIS. These statements were insufferable for all the peoples of Turkey in terms that they support ISIS and that the statements were supporting the massacre of the Kurds in Rojava by ISIS. The HDP Executive Board called for the democratic protests all over Turkey against ISIS brutality and supported the Kobane resistance against ISIS. In many cities, paramilitary forces spilled out into the streets and killed many protesters who were the members of HDP. The unforgettable thing was that the prime minister of the AKP government of the time, Ahmet Davutoğlu, called HDP Co-chairs, told them that ‘there are uncontrollable forces in work’ and that they ‘fear that it could turn into kaos’. It is still not explained by Ahmet Davutoğlu what he knew and tried to say, but the events led to the massacre of tens of people, the majority being members of HDP. Today, the protests against ISIS and the embracement of the resistance against ISIS in Kobane by the peoples of turkey are on trial by means of the incarceration of our comrades.

In 2014, HDP has shown remarkable success in the local elections and headed the poll of 106 municipalities, applied co-chairship in the municipalities, adopted the at least half representation of women, founded women’s centers and youth centers, explored and practices the means of ecological local governance, founded communal cooratives against the capitalist exploitation, supported the diversity of the cultural and artistic activity and enabled access to municipalities with a multilingual manner of work. In a nutshell, after the local elections of 2014, HDP practiced and experienced radical democracy. On 7th June 2015, HDP passed the extremely high election threshold in Turkey in its first general elections, and Erdoğan’s party AKP was not enough represented in parliament to form the government by itself. The coalition could not be founded, and AKP led the country to another general election with menaces. The courage developed in Gezi Parkı Resistance and the new life’s ambition coming from the Rojava Revolution forced AKP and the state to choose between oppression and peace. It is now well known that oppression was chosen, and that it has been practiced with war and violence. Until the second election, Turkey witnessed many big massacres by ISIS and against HDP and the democratic mass organizations that demanded peace. Even before the 7th June elections, AKP was torpedoing the negotiations for the peace process. On 20th July, AKP ended the negotiations for the peace process by killing 2 cops in their houses. This murder was tried to be inflicted on PKK, and when the trials and expert reports showed that other cops were responsible for the murder, the case was closed to be an unidentified murder. Still, the negotiations for the peace process were ended on the pretext of this murder. On the same day of this murder, ISIS committed a mass massacre against the socialist youth during a solidarity campaign with Rojava, 33 revolutionary youth, including members and executives of HDP, were killed.

The oppression in the Kurdish cities and AKP torpedoing the negotiations for the peace process led to the declaration of self-governance in the Kurdish cities. This led to grave violence and war in turkey. Apart from the guerrilla forces, many civilians were killed in their houses, in their gardens, on the streets. They were subjected to curfews and deprived of access to human rights and needs. Most of these civilians were children, women, or the elderly. Including women politicians, Seve Demir, Pakize Nayır, and Fatma Uyar, politicians of HDP and of its component party DBP were killed. Civilians, including local politicians hiding and waiting for the curfew’s end to access ambulances, were killed in the buildings’ basements. For this event, the Human Rights Foundation of Turkey reported the use of the banned chemical weapons by the Turkish military forces. Military vehicles killed children in the cities, these murders left unpunished. The civilians in the curfew cities were displaced and forced to migrate. This displacement is believed to lead to further violation of human rights and deepening of the gender inequality in Turkey, especially for Kurdish women. The soldiers graffitied misogynist statements all over cities, degrading and frightening women in the cities. On the other hand, women guerrillas’ dead bodies were exposed naked on social media by the soldiers. The dead body of a guerrilla was broadcasted on social media as tied by its head to a military vehicle and dragged.

As Erdoğan’s party AKP torpedos and ends the negotiations for the peace process with violence, acts of ISIS, and murder of polices by unknown assailants, HDP was tried to hold responsible for the war. Since then, thousands of students are incarcerated, hundreds of people killed by bombings and war. And since then, HDP stands to defend and demand peace and the end of human rights violations in Turkey. It is curious why it is such a travesty for Turkey’s judicial power that HDP defends peace, democratic politics, or that HDP is against ISIS. But it is certain that our struggle for peace, democratic resolution, and new life will continue. 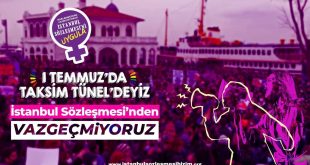 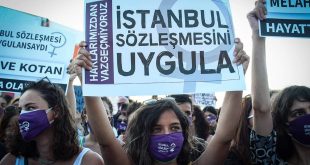 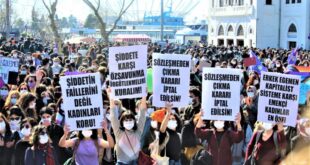