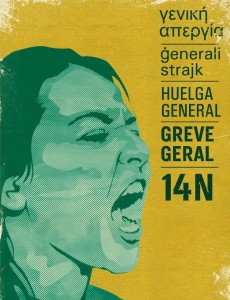 With a reasoned delay, we publish a small dossier concerning the 14N day of European mobilisation and strike. Beyond this short introductory text, the dossier collect contributions from Greece, Spain and Portugal. We chose not to intervene immediately, insofar as our aim is to discuss critically about what happened, and what was missing, on November 14.

On 14th of November in Lieges several thousand workers responded to the call for the strike against austerity that came from the socialist trade union FGTB. Five thousand of them demonstrated in Place Saint-Paul. At the end of the demonstration hundreds of people marched towards the headquarters of the socialist party in Place Saint-Veronique and threw eggs against the front wall denouncing «the complicity of the socialist parties of Europe with the austerity policies». The action led to some arrests. In our opinion, what happened in Belgium gives a good indication of 14N. In an apparently off-center square and far away from the South of Europe, the protest against labor exploitation and general impoverishment combined with the contestation against those who plan, favor and foster the austerity policies. The two forms cannot be separated. The concurrent presence of protest and contestation was the rich and complex mark of 14N.

We thought that, particularly in the South of Europe, 14N could be an occasion to be counted en mass and not back down. Therefore we asked three comrades that live in Oporto, Madrid and Athens to comment on what 14N was like in those cities, in the frame of the general wave of struggles that has tried for several months to build a real opposition to austerity policies. Continuing on a path we have been following for a long time, we were interested in knowing the role of the trade unions in the organization of the mobilization. We wanted to understand whether it was just a protest, perhaps with nationalist tendencies, or if it is possible to glimpse some anticipations of autonomous organization. We asked information about the presence of migrants in the protests, the strikes and the demonstrations, because it seems to us that migrants have been absent from the discourses of those who take part in and organize the movement of protest. As a matter of fact, we think that the absence of migrants in all that we saw and read till now, despite the fact that they are those that in Europe pay the highest price of the crisis, is a striking element. A very relevant part of the European proletariat runs the risk of existing only when it is massacred by a re-emergence of fascism. Moreover, we asked how the political system, no matter how much it might be contested, is still able to govern the situation. We also asked if Europe is sensed as an enemy or as a possibility to blow out globally the austerity policies. We were interested in knowing how those who took to the streets on 14N imagined the global European space with its internal contradictions, because today Europe is experimenting in an almost paradigmatic way the concurrent presence of depression and economic resistance. While on a global scale a character of this crisis is to not be equal for everyone, for us in Europe it is interesting for the internal differences of the conditions that one meets and have to face.

The comments on the 14N reflect the different situations, as well as of course the point of view of those who wrote them. In all three cases, it is clear that the strike against austerity was neither an event nor a new providential beginning, but that it has to be included in a long term process that is complex and contradictory. The 14N pointed out not only the difference among different countries, but also those emerging within each of them. It was not a universal success. In some places, it was not even noticed. However, it pointed at the question of a transnational time of struggles that, being not reducible to a common agenda, opens up the issue of an adequate capacity of political organization. Organization does not simply mean the construction of a structure which could assemble, coordinate or direct the single struggles. Within the transnational time, organization means primarily the political capacity of enhancing specific demands. In this way, the identification of «transnational» with an empty universalism could be avoided, while it is gained the possibility of acting within and against the process of transformation of society.

We believe that the logic of the process and of its possibilities has a truly European dimension, and allows pointing out the most evident novelty of the Italian 14N, i.e. the young age of many of those who took part in the demonstrations. The political problem they posed places itself between their current and specific condition of students and their difficult if not improbable work future. Yet, inside the above-mentioned complex process, the fact that they took to the streets with practical impatience is the livelier mark of their presence, because they put into play the immediate present as a space of action. In many cities the police was in the squares to settle a score not with this more or less organized group, but with the possibility that the opposition to austerity gain a determining political weight. The stake was not the outcome of the clashes in the streets and squares, but the possibility of breaking the bank of those who transform austerity into a duty and a necessity. We think that the youngest revolted against this duress.

So it is a matter neither of generations, nor of a loneliness looking for someone to be represented by, like many journalistic chatters whispered probably to obscure the fact that in the last months with a constant regularity large events with a mass participation have expressed behaviors of very strong protest and contestation against the austerity policies. Not only in Italy, indeed, there are people that demonstrate in order to testify publicly their own rage and maybe their desperation, and people that choose to hurl that rage against those who plan, apply and defend the austerity policies. The most amazing thing is that, not only in Italy, these different political behaviors coexist one beside the other in spite of the warnings, the sermons and the threats. It is not insignificant that 14N happened under the name of a “strike” called by the big trade unions that in the end organized it with extreme difficulty and much opposition. In Italy we arrived at the paradox that a European union initiative ended up underlining the difficulty of the trade unions on the national level. The behavior in the squares – not only the contestation but also the protest – were addressed against those who have turned the strike into a symbolic instrument, far away and separated from daily living and work conditions.

The concurrent presence of these two political behaviors represents the mass contradiction we will continuously have to deal with. The persistent influence – often majoritarian, more seldom hegemonic – of the big European trade unions in calling and neutralizing the mobilizations cannot hide the extent and the complexity of the social figures that were present for 14N. In a moment when precarity is becoming the normal form of the labor relationship, establishing the preliminary conditions for the constant blackmail of poverty, the problem we will have to face in the next months will be that of keeping together those two behaviors in order for the contestation to assume the form of the mass protest. If 14N proved something it is the concrete possibility of politically connecting protest and contestation. Only if we deepen this connection also outside of the squares and of the events will we have the concrete possibility of seriously opposing austerity and its policies.

Delayed reflections from Greece, for a strike that wasn’t by CHRISTOS GIOVANOPOULOS – Dikaioma, network of precarious and unemployed workers, Athens

General strike and mass-protest in Portugal… and the limits of mobilization, by ISMAIL KÜPELI – Porto