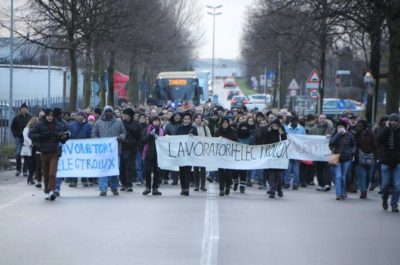 Even though there is no shortage of past and recent cases, to sack a trade union delegate employed in the firm for 29 years is still not a widespread practice in Italy. Also, if the firm is a multinational Swedish company, which arrived in Italy with a clamour of trumpets for its participatory industrial relations and the new organizational models aiming at going beyond the assembly line, the thing is even more notable. Truth is that Electrolux, which has been in Italy since 1984, has demonstrated several times its most violent face: in Susegana (Treviso) it has one fridge done every 39 seconds thanks to the progressive speeding up of working rhythms and to cuts in work breaks. Some years ago, thanks to a complicit government, it succeeded in cutting even permits for trade union duties. Now it is starting to cut its most quarrelsome staff as Augustin Breda, the historical workers’ leader, trade union delegate since many years, who supported workers’ struggles even in the most critical moments, when the multinational company wanted to shut down its plants in Italy. His sacking is meant to be a warning to all the workers, not only at Electrolux, but in the whole region and for the whole sector. This is an «End-of-Eighteenth-Century» American style, but with contemporary techniques and technologies employed by a company endowed with a solid management based in Sweden, the country of welfare state and trade union rights. The fairy tale of good capitalism of Northern European countries crumbles in the peripheries of Europe, where apparently it is possible to test a politics of industrial relations, which has violently global marks. The world of rights inside and outside of the factory wavers where the wage work starts. It doesn’t matter if this wage is paid in China, Poland or in Veneto.

In order to fire Augustin Breda, some private detectives had to tail him for days, spying his private life for botching some kinds of evidence. His crime would be to unlawfully have taken advantage of the law 104/92, that establishes the right of workers to be absent at work in order to take care of his/her relatives. He was suspended on the 5th of June, after a summary trial in which he demolished the detective agency’s version, and he was fired on the 15th of June. Ten days to take a decision against a man who worked in that company for 29 years recommend to pose some questions. 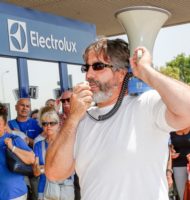 In all these years Breda has been at the forefront against employment blackmails and the worsening of working conditions, continuing to report workers’ health damages due to the hectic pace causing professional illness. It is no surprise, then, that after decades of repetitive work based on assembly line with constrained movements, a quarter of the workforce have reduced working capacity due to body wear. In Susegana’s factory, as in the others plants of the Electrolux’s group, however, has arisen a workforce aware of its role in Italian and European society. The company has therefore got rid of a working leader, with a deep knowledge of the productive organization, particularly with regard to the measurement of workloads. It is surely by chance that the next week will begin the evaluation and analysis of the risks arising from repetitive movements of workers and that in July there will be elections to choose the new trade union delegates. Two fundamental steps to which, however this story will end, Breda will not take part. To spy, to sack, or at least to prevent the most «dangerous» workers from speaking out when decisions with profound impact on the body of other workers are taken.

The solidarity of fellow workers was not long in coming, in Susegana, as well as in the other Electrolux plants. Since the first days there have been strikes and pickets to defend Augustin Breda against the arrogance of the Swedish multinational and its Italian or Swedish executives. The road to bring Augustin Breda back to his comrades is still uphill, but everyone has realized that it is not just about defending the rights of an individual. At stake, there is the freedom of action of the workers within the workplace. In Susegana, as elsewhere.