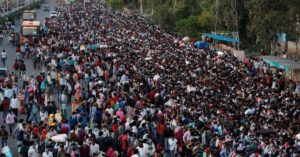 We publish a short contribution on the situation in pandemic-ravaged India, written for ∫precarious connections by Ishita Dey, assistant professor at the Department of Sociology of South Asian University in New Delhi. The central government of Hindu nationalist and market fundamentalist Narendra Modi dealt with the ‘first wave’ of the pandemic by imposing a total lockdown within hours without any preparation, pushing millions of migrant workers to move across the country to go ‘back home’. With official data reporting a rather low number of infections, the government then declared the pandemic over. In the meantime, mass events, mostly religious in nature, were authorized. The government, which had criminalized religious events promoted by Muslims, then favoured and supported large mass events from Hindu adherents, such as the Kumbh Mela that took place in April, where hundreds of thousands of people gathered without any form of precaution. The clear intent of the government was not only to claim to have defeated the pandemic, but to favour Hindu groups to fuel nationalist support for the BJP-backed government. In this climate, state elections were held in several states, with large rallies and demonstrations. In a period of a few weeks, the number of infections and official deaths grew exponentially to make India the global epicentre of the pandemic, with thousands of deaths every day. But even these numbers are far from describing reality. Away from the data and the spotlight, the real numbers are completely out of control and according to some calculations even more than ten times the official figures. In particular, rural India is in the grips of an epidemic with no control and no effective health facilities. The open-air crematoriums have been working non-stop for weeks, and along the banks of the rivers, particularly the banks of the Ganges, thousands of improvised burial grounds have sprung up where bodies that have no place in the crematoriums are buried. While this tragedy of immense proportions takes place, the ‘business friendly’ government of Modi continues to present the image of an India in full economic growth and to promote mega projects of infrastructural and urban development. But, while the mobilization of farmers who have been protesting against land reform for months continues, the vote didn’t favour the government’s party. In several states, forces opposed to the BJP and nationalist discourse won. In the case of West Bengal, on which Modi was counting to score if not a victory an important symbolic advance, the BJP’s growth came to an abrupt halt leading to a stinging defeat. In this sense, Ishita’s text reasons on the intertwining of a pandemic situation that stuns the country and a sense of ‘waiting’ behind which dissatisfaction and seeds of rejection for the policies of the current government grow.

The sound of birds, occasional calls from vegetable vendors, fruit sellers and sirens of ambulance have taken over a city I made my home decades ago. Having tested positive to Covid-19 in November 2020 I felt cared for by the state (in this case the state Government of Delhi). Two civic volunteers visited my rented apartment to check if I had adequate room for home isolation. They gave me a form which had to be signed by me and my guardian/ caretaker (in this case my landlord) that I will comply with rules of home isolation. A call came from the monitoring centre to ask me if I had medicines, thermometer and an oximeter. I also received a call asking me details about the person I last came in contact with.  Every day a representative from the government or outsourced agency would call up to check my oxygen saturation levels, temperature and urine flow. The doctor from the local health centre called me after every three days. A local health worker called me to check if I needed food. All of these, I was told was part of the government protocol. After completing my isolation when I called in on a helpline I was directed to the local health centre to collect my discharge certificate. I went to the local health centre to collect my discharge certificate.

According to the government data, on 10 November 2020 Delhi recorded 7830 cases out of 59,035 tests that was conducted. Cut to May 2021 it is a different story. I do not want to bore you with the numbers as things keep on changing every minute but I do want to remind ourselves that on 22 April 2021 a member of Delhi State Legislative Assembly is tweeting about lack of medical oxygen from his hospital bed. He urges Haryana and Delhi to make arrangements so that people don’t die due to lack of oxygen. As I check on a friend to know if her aunt could find a hospital bed she replies, ‘yesterday, she was cremated’. I fear to check on people if they don’t respond. And, I completely agree with fellow anthropologist Atreyee Majumder  who writes that “grief is a sacred emotion” and it is important to separate fear from grief.  Additionally, I feel it seems like we are left in a permanent state of ‘waiting’- waiting for beds, waiting for oxygen supplies, waiting for critical care facilities, waiting for the first or second dose of vaccination, waiting for a ‘lead’ that would save the life of a near one.

I know it is important to understand the who’s and how’s of the situation and the need for a robust analysis of governance. But it is time to pause and take a stock of how the first wave exposed the distrust in March 2020 to how India managed to celebrate ‘democracy’ by conducting elections in five states with no social distancing measures, or left the protesting farmers at the fringe of Delhi border waiting. Prisoners had to appeal to courts to themselves tested while permission to congregate starting with religious festivities, to weddings to public events (including conferences, seminars and cricket matches) to experimenting with opening of schools or returning to ‘normal’ was underway.

Earlier this year (in January 2021), while curating a special issue on South Asian Experiences of COVID 19 I had indicated the pandemic has changed the nature of the social in terms of ‘trust’. In the first phase of the lockdown the horrifying images of the migrants taking to the streets and roads to return ‘home’ showed seeds of distrust. The state of public health infrastructure is made up of scores of doctors, nurses, ward boys, sanitation workers, and every professional attached to hospitals scramble to save a life apart from the community health workers known as ASHAs who continues to put up a brave face. The local pharmacy stores have played an important role in this fragile health care system. Today in the so called second wave, the images of pyres at crematoriums and parking lots being converted to crematoriums reveals what it is to be in a state of waiting – specially the workers at the crematorium who are struggling with the ‘rising body count’ as  Mihir Pandey points out. The workers at the crematorium, Pandey reminds us are not vaccinated, not insured and let alone have safe work gears except a mask. The worker whom Pandey interviews does not wish to be named because of the caste based stigma associated with the profession. The priest tells Pandey that they can only get vaccinated if “the Government comes here and gives to us”.

Right now, on paper anybody above 18 is eligible for vaccination provided you have internet access, smart phone, identity document and navigate the CoWIN app or website. While I was a lucky beneficiary of Delhi state Government’s free roll out for 18 + to ‘wait’ in a government run school and queue up for the first dose it remains to be seen how scores of people in semi urban and rural areas across India remains to be vaccinated. It might be another story of waiting to be told. What do we learn from this state of waiting? I turn your attention to Shahram Khosravi’s  afterword to the edited book Waiting and the Temporalities of Irregular Migration writes that waiting is an inescapable part of our modern lives, but who and how is one made it to wait is shaped by vulnerabilities. Some forms of waiting are ‘forced’ and the experiences of migrant and refugees are a testimony to that and ‘waiting is never an individual act’. The state of waiting that we are experiencing in ‘digital’ India is not a liminal or transitional, but a forced one and self-perpetuating. To wait is not to be equated with a feeling of hopelessness. Khosravi reminds us of the words that is used to signify waiting – intezzar, sabr, etc – all of them have a sense of hope and is not passive. Waiting is a political act, for ‘justice’.

The pandemic has exposed the bare life of the state has left citizens waiting with no redressal mechanism or political will to resolve. As I write I am sure trees have been cut, construction work is going on in the heart of Delhi to build Central Vista Project a magnum opus project to build a new parliament, new residencies for the Prime Minister and President while the state of Delhi is under lockdown. This vista project, let me remind you is going on in a city that is under lockdown due to second wave. Billions of rupees are being invested to create history by wiping out history while citizens struggle to get a vaccine, cylinder or even test. Is this a one off case? No. India is primarily an agrarian country. Since the introduction of new agrarian laws in the name of free market thousands of farmers have been protesting in the Delhi borders. They continue to camp near Delhi border, waiting for the state to hear them. The state has ceased to listen and instead found law and order and public health crisis to make people wait in homes, in prison, in judicial custodies, in hospitals and crematoriums. Natasha Narwal an activist who was arrested under a draconian act that allows detention upto 180 days without charges had to move the court to meet her ailing father who contracted COVID 19. By the time her bail came through her father passed away. Professor Haney Babu of Delhi University contracted an eye infection and does not have access to clean water in the prison. The list is endless. ‘Waiting’ has moved from being an individual to a shared experience and the conditions of waiting are shaped by our collective social and political location. This is bound to have a long-term impact on existing social inequalities in India, and the transformative capacity of these collective experiences will depend on the many seeds of refusal nurtured by the current government policies, and on the political will to claim the health and the dignity of life against the societal injustices exposed by the pandemic. 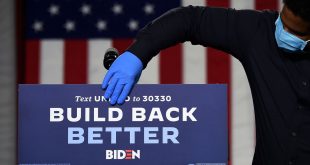 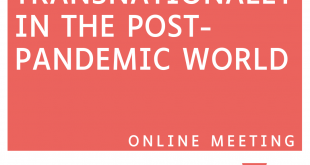 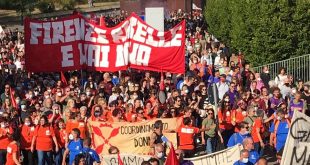