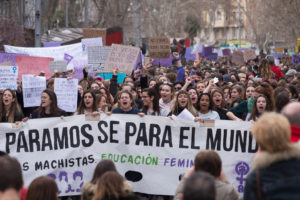 Women’s movement is expanding and it is transforming. It is expanding because the global resonance of its struggle against male violence has turned on new uprisings in Saudi Arabia, Morocco, Algeria, Palestine and South-Africa. It is transforming because all over the world – from Lebanon to Bolivia, from Argentina to Italy, from Chile to Northern Syria – women are facing the different social and political conditions in which violence takes place and it is put in question: war, military imposition of austerity, inflexible precarization and institutional racism, changes of governments that inevitably modify both the expectations and the possibilities of political initiatives. Expansion and transformation show that women’s social movement is always a step forward its organized forms; it is determined by all the contingencies it has to face and, at the same time, it produces a political tension inside all the political movements which contest neoliberalism and are forced to deal with the feminist instance. Expansion and transformation are the processes which are leading us towards the next 8th of March, when the transnational feminist strike will take place for the fourth time in a row. Its repetition is the reason why the strike has to be thought over so that it becomes the moment when women who are struggling against all the different faces of male dominion can speak up on a global scale, when uprisings which otherwise would remain isolated and fragmented can communicate, so that they all have a powerful and simultaneous way out which can keep the process of their connection open.

Continuity is the first challenge we have to face. In Italy, Non Una di Meno has to deal with it in very different conditions compared to the past. These conditions demand to reshape political initiative again and again. There are unquestionable successes behind: three politically disruptive strikes, which exceeded a merely symbolical or militant dimension, put in question the structures of political movements and unions and, above all, gave to women of various generations, workers and migrants, the possibility to recognize themselves in the movement and express en masse and on a global scale their refusal of every kind of patriarchal violence. The movement of the feminist strike has opened up the space for the massive demonstration in Verona, where Non Una di Meno guided a multitude of women and other different subjects against the reactionary patriarchalism of the World Congress of Family, pointedly hitting the government of the horrific Pillon, Fontana and Salvini. However, today the scenario is quite different. These people are now behind the scene, even if they are still a menace for the future. The new government keeps proposing the same old policies with different means; even if it has put away the preposterous and violent tones of the precedent government, it raises promises of discontinuity which make the front of the conflict less clear. Moreover, the radicalization, the duration and the expansion of the feminist movement expose it to the risk of losing its difference. Losing the difference means becoming like whatever militant structure tangled in its jargon and uncapable to speak to the women who have taken to the streets during the last years, or to those women who can and want to do it because they can’t stand anymore violence, harassments on the workplace, exploitation, racism. To erase that difference means transforming Non Una di Meno in a sum of identities – the identities of the coordinating structures, the identities of the political and unionist organizations, the identities of collectives or of genders – instead of being a collective process of speaking up, protagonism and initiative triggered by the recognition of a fundamental line of conflict – the struggle against male’s violence – as a point from which it is possible to radically put in question the whole set of social relationships which feed on that violence. All in all, to renounce to that difference means losing perspective of the mass and global dimension of the movement. It means treating the movement as a totality of subjects who are already free, act as the most antiquate of the vanguards and stop considering the fact that millions of women are still fighting for their liberation every day. This daily struggle must be at the core of the 8th of March strike because for us only in this way can Non Una di Meno win the challenge of continuity, confirming its capacity of expanding and transforming spurred by the global social movement of which it is part.

Recently, Latin America has been the scenario of the global acceleration towards the 8th of March and it is currently overwhelmed by events that will deeply affect the process of the strike. In Chile, Ecuador and Bolivia women kept that process open with their fight against femicides and for free and safe abortion; now they are at the forefront of the uprisings against authoritarian neoliberalism and are facing new and more violent forms of repression. The rapes used by the police to publicly punish women in revolt reveal the patriarchal nature of State’s violence, which aims at producing obedience among those who are fighting because they can’t stand anymore to be oppressed, exploited and impoverished. In Argentina, the feminist movement has decisively contributed to the fall of Macri’s government, but now it has to face the promises of discontinuity of the Kirchnerist team that has fuelled its electoral support by taking up the battle for freedom of abortion. In fact, the Kirchnerist government does not intend to respond to the claims made by women against the debt that forces them to reproduce life in conditions of misery. On the Syrian front, Erdogan had to wage a war in order to crush the struggle of Kurdish women against male and capital domination, and in order to govern, on behalf of the European Union, the movements of millions of people across the borders and of women who are practically subverting the patriarchal order and who constantly run the risk of being raped and killed while struggling for their freedom. Several insurgencies are fuelling the global movement of women, many of them call on each other to consolidate their strength. None of them can overcome the limits of the particular situation from which they arise in the absence of a plan of communication and transnational organization capable of putting at the core of the initiative the material conditions in which patriarchal violence is produced and reproduced. There is not a transnational operative network of the feminist movement yet, but its construction must be one of the stakes of the next strike on the 8th of March.

We think that the assembly organized by Non Una di Meno on November 24th could be the moment for this step forward, the occasion to create the space in which all women who every day fight against the violence of their partners and against the violence of exploitation and racism can speak collectively. Reinvigorating the relationship with the anti-violence centres is one of the conditions that can give visibility to the thousands of experiences of rejection of violence. Claiming a European residence permit without conditions means taking the side of migrant women and recognizing their daily war against a residence permit that wants them chained to violent husbands or unacceptable working conditions. Putting the battle against precariousness back at the centre means making clear the material conditions in which domestic violence is produced and reproduced. The same material conditions in which the sexual freedom practised by lesbian and trans women is crushed and humiliated, because it is the expression of a collective process that criticises at its roots the conditions of reproduction for millions of people. It means recognising that sexual oppression and its racist manifestations are means of blackmail and precariousness, which force women to accept intolerable wages and working conditions or push them to leave their job and return to their homes because the «childcare allowance» provided by the Italian government makes it more convenient to be indigent than to get starvation wages. It is impossible to subvert these conditions if a unique and totalitarian perspective is imposed. As such, we should refuse an abstract universalism that – in the name of a generic female subject identified only as a victim of violence, or in the name of the infinite proliferation of gender identities – replaces the male universalism by silencing the multitude of women who are fighting against the violence of society throughout the world. The struggle of these women made it possible for anyone who no longer accepts to live in conditions of misery, oppression and exploitation, to take a stand and speak out all over the world. By their struggle, these women once again have made the strike a possibility to show power. This possibility is invoked and practiced by millions of migrants, precarious and industrial workers, unwilling to accept any negotiation or compromise. This possibility has been appropriated by a whole generation who wants to fight environmental devastation stealing its future. Feminist political initiative must keep the strike process open to match the expansion and transformation of the women’s movement.

This is why we think that we need to place at the centre of that initiative the social production of sexual oppression, i.e. the fundamental relationship between patriarchal violence, the despotism of capital and racism which acquires different degrees of intensity on the military fronts, in post-colonial contexts, on the borders, in the metropolises of Europe. We continue to bet that the feminist strike is the answer in order not to be crushed between equally unsustainable alternatives. Between coups d’état and democracies regained by arms. Between the freedom to abort and the obligation to be exploited and impoverished. Between the ecologically sustainable reproduction of poverty and the misery imposed by capital together with environmental destruction. Between screamed and silently reproduced racism.  Between male violence practiced in public in order to repress insubordination and male violence silently consumed at home and in the workplaces. We must obstinately make clear the link between every single rape that takes place in every part of the world and the violent imposition of structural adjustment plans, between the restriction of freedom of movement and the war that Kurdish women are fighting in Northern Syria, between environmental destruction and the social relations that try to force women to be docile instruments of the reproduction of this society. To become a revolt by making the feminist strike of March 8th the moment when the struggle of those who are rising up against the present state of things simultaneously ignites all over the world. 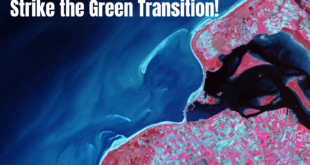