Political intimacy, or: why the Greek vote was not a capitulation 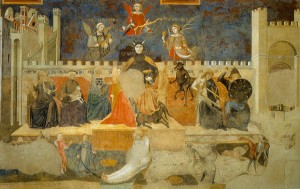 Being in Greece the days during and after the last elections, and reading most of the comments written about them abroad, (but also some written within Greece), gives me a feeling of uncanniness, of a discrepancy; to the point that I wonder if these texts are really talking about the same event I have just experienced. I guess this should come as no surprise, since the situation we are living is extremely multi-faceted and unprecedented, and the models we have at our disposal in order to conceive it and account for it are inadequate. So in this text I am not pretending to give «the real truth» or «the full image» as opposed to a «falsification»; I will just try to provide one additional vantage point from where to read this complexity.

In view of the outcome of the elections, many commentators seem to express a sense of despair for what they perceive as «a macabre affair, conducted in the funeral of Europe’s first radical Left government in a generation». Others, not willing to give up to pessimism, try to delve into the electoral arithmetic and figures, and they come up with invoking the high rate of abstention in order to prove that «the media are wrong in presenting the win of SYRIZA as a ratification of austerity by the Greek people»[1]. In fact, such presentation by the media is wrong. But not for the reason invoked above. These two versions, both the «pessimistic» and the «optimistic», are based on a face-value reading of the electoral numbers and of the declared political aims and programs of the candidates. But that’s not all there is. One has to take into account that, in politics, (as elsewhere), much of the communication is performed tacitly, or indirectly. Including the communication consisting in «the people stating their sovereign will» – especially there. In politics too there is a thing called cultural intimacy at work (in order to use a term coined by the anthropologist Michael Herzfeld, who has done field research for many years precisely in Greece)[2]. Cultural intimacy is a rich and delicate term, but, for the purposes of this article, I use it to denote this usually invisible sub-text which complements and, possibly, transforms/alters what is being said openly and publicly.

I am not speaking about something mystical or supernatural anyway. Political intimacy can be expressed in numbers as well, provided we put the right questions. Then, many things may appear different according to where we decide to turn our gaze. For example, one (non Greek) polling bureau put some of the right questions to their informants in an opinion research they conducted in Greece immediately before the elections. One of these was: «do you believe that the Memorandum of Understanding between the Greek government and its lenders will be implemented»? This is their finding – which they themselves qualify as «astonishing»:

Astonishingly enough, 64% believes that the third MoU will not be implemented, showing a big distrust over the capacity of all political parties pledged to fully implement it. More than that, 79% believes that the MoU will not improve economic and social conditions in Greece, leaving only 15% that believes the opposite. Both figures are showing that Greek citizens have acquired enough experience during the previous years on what implementation means or whether this implementation, and the requirements that are attached with, affect economic performance and social stability. Notwithstanding, answers to both questions send a clear message to the next government and, broadly, to the entire Greek political establishment and Eurozone (emphasis with bold in the original; italics mine).

For my part, the only thing I find astonishing in these results is that there does exist a 15% who seriously expect the MoU to «improve economic and social conditions in Greece». For the rest, I would go even farther and add that the first figure, (which, as one might have noticed, roughly coincides with the percentage of the OXI in the July the 5th referendum), does not just show a «big distrust over the capacity» of «all political parties pledged» to fully implement the Memorandum, but shows a big trust over the unwillingness of one specific political party – precisely the one that «pledged» – to implement it. In any case, this reveals that the Greek society is much less in despair than its (self-proclaimed) advocates, as it has indeed «acquired enough experience on what implementation means». By the way, this is a rather unusual expression to appear in the often technocratic language of pollsters: as a matter of fact, what does implementation mean? And what is this experience the Greek society acquired on it?

This experience, precisely, could be another name for cultural intimacy, or one of its privileged objects. One of Herzfeld’s primary concerns, in fact, is this distance/ alteration that structurally and inevitably intervenes between the formal proclamation of a law (or a principle, or an agreement), and its application –as he expressed it recently, in the context precisely of a discussion about crisis and corruption in Greece and Europe at large:

Nobody is looking at the symbolic roots of corruption. It is a term with very strong roots in the Judeo-Christian tradition – corruption of the flesh – and I do not believe that any state could function well without a certain amount of what one could describe as the ability of citizens to ‘massage’ the laws in such a way as to make life bearable (my italics).

The experience of the Greek people taught them that no one should expect in the near future a European Council to ever come out and say «OK, guys, austerity in Greece (and in Europe) is over». For this reason, it is of no use for just one country to expose itself by insisting on demanding precisely that; even more, such a demand would only exacerbate the obsessive insistence of the so-called «partners» on their punitive measures.

Those who interpret the outcome as a product of «disappointment, […] political apathy or cynicism», would only be satisfied that this is not the case if the Greek voters had preferred «Popular Unity» (a new formation created by politicians who split from SYRIZA accusing it for betrayal). If the people were still disposed to fight austerity, the story goes, they had before them an ample selection of parties who advertised anti-austerity and anti-EU struggle on their banners, so they could have followed one of these. This sounds convincing on paper. But, in practice, people knew that such a vote would only mean starting over again once more what we have already gone through, and probably under worse terms this time around. Because, let us suppose that «Popular Unity» got 40%. What next? Next, a new leftist prime minister would be appointed, who would have to go to Brussels and negotiate an agreement. In such a case, he/she would face the same blackmail as the one Tsipras faced, and she would be equally unarmed against it, if not more. In the meantime, the financial situation would continue to deteriorate, with no apparent gain in sight as a counterpart.

Hence, to my view, the low percentage of new or old anti-austerity/anti-EU parties is not a sign of resignation; it is a sign of prudence. Of the prudence which makes a strategist abandon a front when it can no longer be defended, and devote his forces to more fruitful purposes. Accepting a loss which is inevitable and irreversible, is not defeatism; it is a prerequisite for completing the work of mourning and learning to live again with what has been left to you. So the multitude in Greece, as I see it, did not endorse the fatality of austerity. It just abandoned the modernist fantasy of taking hold of the nation-state and govern it in a better way, pass better laws etc., and decided to work on another path for the foreseeable future: the path of escaping the state, (including inter-state organisations), and their laws; to use an expression by another anthropologist[3], the path of performing «the art of not being governed».

[1] The quotations are from the social media; I prefer not to give the authors’ names as they may not want them to be public, but I can assure you both are genuine.