July the 5th: How the multitude blocked a post-modern coup d’état in the EU 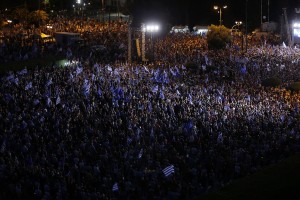 The basic fact, that the «NO» vote obtained an overwhelming majority at the referendum in Greece last Sunday, is well known to everybody. The remarks, conclusions, arguments, possible consequences etc. that one can draw from this simple event are practically infinite. What matters, though, to convey in this necessarily short text is one simple element that was not given enough space in mainstream reports, and was to our view equally important with the outcome of the vote itself. The last week in Greece saw the rupture of an almost 3-year long silence of the masses and their impressive return in the foreground, in the arena of social and political mobilisations. This happened within no more than four days.

In the evening of June the 29th, only two days after the referendum was announced by Tsipras, the image coming out of the Greek society was one of silence, fear, and confusion. All of these dimensions were permanently transmitted, and accentuated, by the mass media. Most officials and intellectuals linked to SYRIZA seemed to share this embarrassment, and some – including ministers – gave signs that they were anticipating the fall of the government and preparing to abandon the ship. Indeed, it was no secret that coordinated efforts were made, both within the country and abroad, to find a semi-legal way to get rid of the government.

In this climate, a gathering and a concert was called for at the Syntagma square in support of the «NO». The turnout was mediocre, and consisted mainly of «die-hard» members of SYRIZA’s «Left Platform», Trotskyists and other usual suspects. Soon before midnight, the last band, featuring veteran rocker Dimitris Poulikakos, appeared before no more than five hundred people. This was deceiving, especially if compared to a rally of about 7000 organised under the title Ménoume Evrópi [We stay in Europe] one week ago, (that is, before the proclamation of the referendum), sponsored by opposition parties, TV channels and celebrities, NGOs, Orthodox priests, and EU officials. Some commentators were paralleling this rally with the Maidan mobilisation in Ukraine.

The respective campaigns went on during the week. Most SYRIZA ministers and cadres were still absent, or presented the NO case without much conviction. So the mass media, without opponent, were constantly bombarding the public with terrorising messages, assuring them that, if we vote «NO», we will be expelled from the EU paradise, we will become «like Zimbabwe», tourism and the economy in general will collapse, a civil war will ensue, and Greece will sink into the sea like a second Atlantis (we personally did not hear the last threat, but it would not be surprising).

Finally, on the Friday before the vote, another similar event was organised in the same square in Athens (as well as in front of the White Tower in Thessaloniki and in central places in many other towns). Everybody, including Alexis Tsipras himself who addressed the public, couldn’t believe their eyes: the crowd was arguably around 100.000 people, and similarly large crowds turned out everywhere. It is to note that most of these people were in their 20s or early 30s, apparently without any previous political experience or affiliation. Importantly, Tsipras’s entry was accompanied by a very unusual – unique, as far as we can remember – musical soundtrack: a 1970s Thanos Mikroutsikos song based on the poem «Microcosm» by Nazim Hikmet, a poem written by a Turkish poet and recounting an event that took place in Kolkata, India. Of course the poem was translated in Greek, but even so its use breaks a long tradition of aesthetic choices for such circumstances, which have been highly stereotyped for the past 40 years around a fixed repertoire concerning heroic sacrifice, produced by such «holy cows» of the nation as Mikis Theodorakis, Elytis, Seferis and other artists-prophets.

This impressive turnout somehow warmed our hearts, but even so, on Saturday evening, most people whom we interacted with, in Thessaloniki and Athens, were hesitating and apprehensive about the result. Only friends and companions from Nicaea, a traditional working class neighbourhood created during the 1930s by Asia Minor refugees, conveyed a certainty about a «NO» victory.

Listening to their messages, we thought they were overoptimistic.

Anyway, TV channels prepared their stages, and an army of opinion counters and other specialists started parading, all claiming that «the battle will be very close and it is impossible to predict the outcome, it will be probably 51-49». However, as the first results were shown on the screen, it became clear that nothing like this was the case. Figures coming from small provincial villages, in the most remote corners of the country, including areas known for their ultra-conservative background, consistently gave instead an image of 40-60 in favour of «NO». The incorporation of ballots from the bigger cities, then Athens, did not change this fact. «NO» was the winner in all 52 of the electoral districts; there was not one single region to give a «YES» majority.

What was it that made all these people re-enter the political scene and take the affair in their hands, when nobody else would?

To a certain extent, it was indignation. Many people got furious and voted NO as a reaction to the blatant attempts to blackmail them and manipulate their expression, to their infantilisation from the part of condescending and colonial North-Western European officials – and/or the self-colonising moralism exhibited by the (self-proclaimed) «modernist intellectual élites» within Greece. These people blatantly failed in managing or masking their arrogance and revengefulness, when for a few days they were convinced of their victory[1].

But we have the impression that there was a sense of dignity and, even, hope in this engagement of so many young people. It may sound curious to use this word in a situation of generalised precariousness, of prolonged misery and impoverishment, and during a full scale bank run. But it seems that people all these years have gone so deep into fear, that they already find themselves beyond a certain threshold. This does not mean they are in despair; at least not all of them, not always. It may also mean that they cannot be terrorised any more, that at least some threats are not frightening enough for them. Beyond this threshold, there still can be a force ensuring stability and peace of mind amidst the greatest turmoil, even politeness and civic virtue, in so far as it can function as a democratic conatus.

So maybe this hope, at first sight irrational, unjustified by any given fact in the «economy» and the «external reality» in general, is a hope generated by our being together, by our being and acting in common. Which is not to say that it is extracted from «the interior» of some pre-existing essence or subject, be it «the people» or «the nation»; it is a hope created within – and between – singularities meeting each other. A hope of the multitude.

[1] One example will be enough: during a TV panel discussion, Antigoni Lyberaki, sociology professor and MP with Stavros Theodorakis’s party «To Potami» [The River], unashamedly stated that «those who are poor are not necessarily bad people [sic], but they make the wrong choices at critical moments».