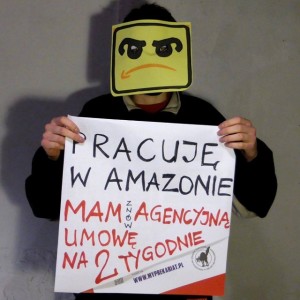 We publish an interview with Magda from Inicjatywa Pracownicza (Workers’ Initiative), a Polish trade union which took part in the demonstration My Prekariat on the 23rd of May. Magda tells us also about the situation in Amazon warehouses in Poland, where since a few months the workers started to organise and discuss among themselves and together with their German colleagues. The interview shows a context where the building of processes of social struggle and the issue of strike clash with an extreme precarization of labour, even on the legislative level. It also shows a picture of Europe as a space where the wage regime and precarity are by now firmly played across the borders and exploited by the employers. These issues shall remain at the core of the discussion opened around the perspective of a transnational strike.

Can you tell us something about My Prekariat?

There was a demonstration, last Saturday [23rd May], in Warsaw, of My Prekariat. Basically the demonstration was organised to develop a discussion about the precarisation of working conditions in Poland. According to Central Statistical Office right now 13% of Polish workers work on civil law contract, 8% is self-employed. It means that they are not recognised as workers. Another thing is that 27% employees work on fixed term contracts. That numbers grow. Basically the idea is to network these workers together.

Can you please tell us something about the concrete demands and about how the protest went?

Few hundreds of people came which is not bad in Polish condition. There were artists, freelancers, workers of the NGO sector, nurses, students, people employed on universities, workers of kindergartens, construction workers, teachers, Amazon workers etc. So, the people who took part in the demonstration basically wanted to protest against this idea of making the working conditions very elastic. The main demand were protection of stability of employment, freedom of associating in the trade unions and the right to benefit from social security system. Demonstration received wide coverage in the media and got very positive comments. There were lot of discussions about it in press, radios and Tv.

Can you please tell us something about the novelty of this idea of «My Prekariat»?

In Poland first temporary job agencies were opened in 2004. We all know that Capital have been using temporary employment since its beginning. However nowadays we have to learn again how we can effectively organise ourselves and break new divisions between us like this between temp and permanent employees. As I said the aim of «My Prekariat» is to bring these who work in super precarious conditions together and this is something quite new.

Few years ago there was a campaign against « junk contracts» . Then, the media started to see and talk about this problem. By junk contracts we understand civil law contracts, self-employment and temporary, fixed-term contracts. Then in 2012 artists organised one day strike. One of the main slogan was « I am an artist. This does not mean I will work for free» . They protested mainly against low paid or unpaid work and flexible forms of employment that disqualifies workers from basic rights like right to security system (unemployment benefits, pensions, social assistance benefits). After that around 150 of art workers and freelancers joined Workers Initiative to continue their fight. We can see «My Prekariat» as a kind of continuity.

The problem is that although we all agree that working conditions have been flexibilized, we are still discussing the use of the word «prekariat» . Some artists and intellectuals talk about themselves as a kind of different class – «Prekariat» . Construction workers, nurses, teachers: the people who took part in the demonstration, they don’t see each other as a different group; but as « normal» workers: proletariat. So I had a few discussions with them about the fact that this demonstration is not only about creating this precariat identity, but also and mainly about working conditions. It was problematic for us because it reproduced division, usually created by employers in workplaces, in our Union and we had to put some effort to break these divisions.

One of the groups who took part in this demonstration is a group of workers employed in Amazon warehouse. Amazon was opened in Poland in the end of 2014, in the beginning in Poznan, and then two other warehouses in Wroclaw, that is 180 km from Poznan. In the beginning the working conditions there were not so bad. Also people from other warehouses, like H&M, left their work in the H&M warehouses, and brought themselves in Amazon warehouses. A local media wrote a lot of texts about Amazon, saying « it’s a labour camp» etc.. Workers were not very happy about it and said that it was not really a labour camp, for them the work in Amazon was better than in other places. But, shortly after that, Amazon started to increase targets and workers started to have problems with pays which were calculated in wrong way. On the other hand, there were complicated regulations about bonuses, so they were usually unsatisfied with their wage.

But the situation changed. Two weeks before the most intensive peak time, they fired one hundred agency workers. Amazon said that they dismissed these people because they were not fast enough, but the people who were sacked were really pissed off because the way of accounting their productivity is not transparent. For example, they don’t care that there is no products to pick or pack or your computer is broken. It showed to all workers that Amazon it’s not such a good place, as they thought in the beginning and work is heavy.

Targets are one of the most important issues because they started to increase them very quickly, currently workers can’t reach these standards because they are too high. They organised petition against such high targets. In Poland you can be sacked because of targets, they don’t do it in Germany. Amazon workers from Poland are aware of it because they exchange information about working conditions with German workers. Till now they met 3 times: in Frankfurt, Bad Hersfeld and Poland. People from Amazon in Poland earn four times less than in Germany. The working conditions are maybe even worse, because of targets that getting higher and higher.

Which trade unions were involved in the organisation of the Amazon workers?

The first union which was established in Amazon was our trade union, Workers’ Initiative. It was started by leaders who were trained abroad. They saw unions working in Amazon warehouses in England and decided to establish a union themselves. They also didn’t get stocks like leaders in England what pissed them off. Then they started to involve more people, also agency workers. Right now there are 180 workers in the union, it is just the 10% of 1700 people working in Poznan. In Polish condition, it is quite a lot.

Are the other workers involved in other trade unions?

In Wroclaw 80 people is unionised in Solidarity (Solidarnosc), a mainstream union. There was a meeting in Wroclaw between Solidarity and Workers’ Initiative, so we don’t have any open conflict right now, but we don’t like the way in which Solidarity works as a union. Sometimes for them it is more important to take care of law regulations and have a good relation with employers, than to really fight for workers rights. We don’t agree with such way of organising.

What is the average wage inside Amazon in Poland?

All the people who are in the shop-floor get 10 zloty without taxes – 2,5 euro per hour, without taxes. We have to know that if you pay the rent, it is much cheaper than in Italy or in other countries, but some prices in Poland are very similar. So it causes situation where you work, but you are still very poor. That’s why people from Amazon also started to demand higher wages. Right now they have this demand, but there are discussions among Polish and German workers on how they can get wage rises. Workers are still in the process of organising themselves and of discussing it with German people.

Are you planning a strike? Have they ever gone on strike?

Amazon workers are going to maintain pay rise demand, they don’t exclude the option of labour dispute. But in Poland it is not easy to organise legal strike action because of the law regulations. Recently there is around 15-20 strikes a year in our country. One of the reason of it is the complicated and very bad law on strike. On my personal opinion, in Amazon they should organise something different, like a slow-down action and don’t give a shit about these formal things. Generally atmosphere in the warehouses is quite hot, people want to do something. In one week 400 people signed this petition against too high targets and low wages. They [the bosses] were a bit scared about that. But if you want to organise a strike, you really have to be prepared for it, you have to know the workers, your colleagues, you have to know when you have to hit, when to organise the actions… They need some time to learn how they can organise themselves in Poznan.

The workers from Amazon in Germany went to Frankfurt on the 18th of March, during the protest against the ECB, and on the 19th March at the assembly towards transnational strike. They start to be involved in the process. What about the Polish Amazon workers? Do you see them in the future participating in the project of transnational strike?

I think so. But I also think that the priority at the moment should be to build strong relations and solidarity between workers, learn what they can do in their workplace and how their work is organised, how are the relations between workers, between shifts. Then they will be more prepared to organise something. Of course they know, and we all know that it is important to link our struggles.

The Amazon warehouses in Poland were established also because there were strikes in German Amazon warehouses. We got some information – but we are not sure whether it’s true or not – that they are planning to move the 70% of distribution from German warehouses to Polish ones. Even if the percentage is lower, it’s obvious that they want to use Polish workers as a counterbalance to German workers and against their protest. Of course we know that if we don’t link our struggles then we will be in a situation where the capital will use Polish workers as kind of strike-breakers. We don’t want this situation. The only possible way to do something with it is to break the divisions between workers, and to build something together. First, though, we have to break the divisions in our workplaces and build strength in our workplaces. But, as I said, we also think about international connections and building international links and strength on the international level.