This is not Sparta, this is Salamis: Eurogroup, Eurocentrism, nomadism 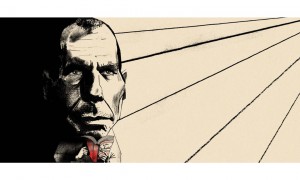 The current conjuncture, in Greece and also beyond, is marked by efforts to make sense of what happened at the February negotiations within the Eurogroup. Sources close to the Greek government try to present their outcome as a «victory», while other people, outside but also inside SYRIZA, consider instead that this was a «defeat» or a «capitulation».

I believe the latter impression presupposes a conception about strategy which is itself Eurocentric and masculinist (or phallogocentric, to use Derrida’s neologism); a conception organized around the image of the definitive battle where one has to show bravery and prevail over the opponent. Without sharing the view that this was exactly a “victory” –for roughly the same reasons. In what follows, I will try in turn to read the strategy (if any) applied by the Greek government in these negotiations, and its gains (if any), through the lens of two closely related axioms:

– Power is not a thing, nor a substance, but it is the capacity of acting upon actions (Foucault).

– The good strategy is to try not to crush your opponent’s forces, but to use them –especially when these forces are devastatingly superior than yours (traditional precept of the Asian martial arts).

In the summer of 480 BC, a force that is traditionally classified as «Eastern», the Persians, had invaded a place that is traditionally classified as part of the «West», indeed as its birthplace. Guess which: Greece.This invasion first led to a battle which by now has been elevated to the status of a pop icon in late modernity: the one at Thermopylae, where 300 Spartans faced boldly the Persian army and resisted heroically, but finally died to the last one «like real men». Curiously enough, the event that made king Darius abandon his plans and return to Asia, the naval battle of Salamis, is much less famous than this glorious defeat.

The battle was given at sea after the Athenians followed the risky advice of Themistocles not to defend their brilliant city at all. The oracle of Delphi had predicted that they would be saved by «wooden walls». Some took that to the letter and started cutting timber. But Themistocles was able to give the right interpretation to the signs: the wooden walls were the ships. The strong point of the most vulnerable is not closure, but flight to the open, to the liquid element. So the whole population, including civilians, retreated from Athens, which was occupied and burned to ashes by the Persian army.

Then, the large Persian fleet followed the retreating triremes, but it was obliged to give the battle at the straits between Attica and the island of Salamis, where its numerical advantage was useless and indeed turned into a disadvantage. Which is why it was eventually defeated.

In the Western imaginary, this conflict has been construed as the first, foundational clash between «European civilization» and «Asian barbarism». This dualism is to be found to a certain extent already in ancient Greek historiography, and especially Herodotus. But in Herodotus we find a small detail, a third element, which prevents this dualism from closing and being really universal. This is nomadism, and more precisely the nomadic people of the Scythians.

Herodotus, like some later classical writers, thought of nomadism as a military strategy rather than as a way of life which was the opposite of Greek settledness. His Scythians were inaccessible – in Greek, aporoi. Instead of defending the walls of a city or capital against an invader, the Scythians simply dispersed. They had no city, not even the idea of a «centre», for their only fixed places were on the distant periphery of their realm. Darius I of Persia, later the invader of Greece, entered Europe for the first time in 512 BC on a punitive expedition against the Scythians. He bridged the Bosporus, then the Danube and then marched as far as the river Don in a vain attempt to bring the enemy to battle and conquer them. Frustrated, he was eventually obliged to retreat and leave the Scythians undefeated. So the Scythians, who in so many ways have to be presented as the polar opposite of the Athenians, are suddenly in some ways like them – they too have beaten the Persians. Not only that, but they have done so by behaving as the Athenians would later behave, according to Herodotus’s description of the Persian Wars: the Athenians overcame the invaders not by trying to defend their territory but by taking to the sea in ships and becoming aporoi (Neal Ascherson, Black Sea. The Birthplace of Civilisation and Barbarism (1996), London, Vintage, 2007, p. 54-5).

I am certainly not intending, nor able, to assure anybody that a glorious victory such as the one in Salamis is waiting around the corner; even less that it has already taken place. However, I think that the tactics that Varoufakis followed in these negotiations can be seen as a parallel to Scythian nomadism.

Rather than frontally attacking a much superior force and dying heroically, Varoufakis opted for de-territorialisation; moving back and forth, he entered the field and tried to lure Schäuble et co. into coming out to open sea and declaring before everybody that they oppose the resolution of a humanitarian crisis; into showing publicly that they put profits before people, and before democracy, and assuming the political responsibility for that – rather than invoking the «objective forces» of the market. In doing so, the Greek negotiator exposed himself, but this is no news as Greece was already exposed in multiple ways; in exchange, the «creditors» are now exposed as well.

Varoufakis has been accused by some, inside and outside Greece, that he acts in a «narcissistic way», like «a performer». Indeed he did a performance, but this was not a funny little particularism of his character, nor an accidental weakness; it was the very core and the strength of his action. His discourse was performative, as it was not addressed only to his fellow ministers in a dualist way, but it presupposed a third element: a set of listeners/ spectators. Or, better, it tried to introduce, to produce this audience through its very developing and bring it in the game – to make public what was previously secret. This is why the outcome contains a «constructive ambiguity».

For this reason, any judgment about the outcome of this triangularisation will depend on what everybody else will make of this exposure, on the reaction of this audience –which is not yet known. It may be that the other European peoples feel OK with Schäuble’s hierarchisation. In such a case, perhaps different kinds of performances may prove preferable.

So we cannot tell yet if this performance was a «felicitous» one, as they say in linguistics. For the time being, what is certain is that this exposure involves a loss. But sometimes, there are losses that are inevitable, definitive, and then it is not worth devoting forces in order to reverse them –since this is not possible any more. Alles was besteht, ist wert, daß es zugrunde geht (All that exists deserves to perish). In 480 BC, Athens was burnt, but a new polis was built in its place later.

The reasons why it is difficult to judge where the performance was successful, can also be expressed in another way. The Greek negotiators had to move in the extremely limited space left to them between two seemingly contradictory demands: the one was not to cede to the blackmail of the austerity fundamentalists, and the other to keep Greece in the Eurozone – both of which were part of the mandate of the last elections. This was a situation that could be aptly described by a term much appreciated by Derrida, and which coincides with the one used by Herodotus in relation to the nomads: it is an aporia – a situation where there is no passage, no way forward.

This is, of course, an aporia, and we must not hide it from ourselves. I will even venture to say that ethics, politics, and responsibility, if there are any, will only ever have begun with the experience and the experiment of the aporia. When the path is clear and given, when a certain knowledge opens up the way in advance, the decision is already made, it might as well be said that there is none to make: irresponsibly and in good conscience, one simply applies or implements a program (Jacques Derrida, L’autre cap, Paris, Ed. de Minuit, 1991, p. 41; translated in English as The other heading).

The decision made by the Greek negotiating team, who were in this aporia, arguably was to become themselves this aporia (for the others), to make it public and contagious. To call this becoming-inaccessible «a retreat», presupposes the underlying notion of a front (according to which the “back”, and generally the sense of direction, is defined). This move was certainly a flight. I cannot be positive that with this flight «SYRIZA won time and space», as my friend Sandro Mezzadra claimed in a recent common article he wrote along with Étienne Balibar; but, in any case, I can recall that the tradition of Italian post-operaism, including Sandro himself, and also Paolo Virno, has taught us that there are at least some flights that are not cowardice or passivity, but autonomy and agency.

From this point of view, the success of the fight against austerity and neoliberalism will depend on our ability to combine traditional militant and/ or institutional struggles with a becoming-inaccessible, like the Scythians who «simply dispersed instead of defending the walls of a city or capital against an invader». Perhaps the terrain for this struggle «is – can only be – Europe itself», as Balibar and Mezzadra affirm; but equally important for me is the question how does one move on this terrain. In this respect, I think it would be useful to build on some sources of inspiration from other continents as well – such as Africa, which incidentally was Derrida’s birthplace. Or to move between the two (or more), to work on our aporias rather than trying to eliminate them.

The injunction seems double and contradictory: to ensure that the centralizing authority does not reconstitute itself, without cultivating for themselves minority differences, untranslatable idiolects, nationalist antagonisms, the chauvinism of the idiom. The responsibility consists in not waiving any of these requirements. We must therefore seek to invent gestures, discourses, political and institutional practices that inscribe the alliance of these two imperatives, these two promises, these two contracts: the capital [city] and the a-capital, the other of the capital. It is difficult. It is impossible to conceive of a responsibility that responds from or to two contradictory injunctions. Certainly. But, on the other hand, every responsibility is the experience of the impossible. […] When a responsibility is exercised in the order of the possible, it follows an inclination and it evolves a program. It turns the action into an applied consequence, the simple application of a knowledge or a know-how, it turns morality and politics into technology (Derrida, L’autre cap, pp. 45-46).

This aporetic conception of responsibility could be a useful antidote to the umpteenth obsessional repetition of «pacta sunt servanda», and a welcome emergence of politics in the midst of the legalism and technocracy of the European institutions, who can articulate no other idea of a way forward, no better project for a future than that «we must stick to the rules».