The politics of the governed. Frankfurt in Greece, Athens in Europe 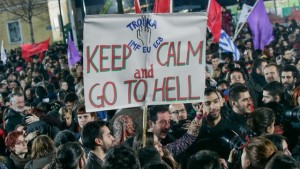 The Working class has no fatherland

Greek elections are having their effects. We are not meaning celebrations in the squares, smiles or declarations of respect, but the clash with European and global financial institutions. In front of this clash, even those governments which offered Tsipras their «good wishes», like the Italian one, now hasten to declare that the answer of the ECB is «legitimate». Renzi the hero, who is ready to change the world when this change means to increase the precarization of labour and life or to strengthen the executive power of the State, barricades himself behind formalism when we come to the point. It is not surprising. Beyond Renzi’s political bullying, what is happening questions the political initiative of social movements in a moment in which, as it has been said, the victory of Syriza is a breach that we should maintain open and enlarge. We do neither imagine the eternal return of the same, nor we predict improbable repetitions of what actually happened in a neighbour country. In this situation, to ask what the so-called Italian Left can or cannot do is politically irrelevant. The masses which had flown into Plaza del Sol in support of Podemos, but also those who overfilled again Syntagma Square, are the sign of a state of fibrillation whose effects are not granted.

The point is to take on the challenge and the political opportunity with which we are confronted, and this leads to two main consequences: first, we should recognize that Europe is really our inescapable field of struggle. This is why we acknowledge the importance of the Blockupy movement: this coordination strongly pushed for a transnational political agenda and initiative even when a great part of social networks and movements went back to the national dimension, or lost their time in discussing whether Europe was desirable, despite we long since live a global world. Above all, this is why we believe that the European dimension should live within the everyday struggles and coalitions that are organized on a local or national level. Second, we should understand that the current power struggle offer the chance to articulate a political program to strengthen the communication among struggles on a transnational scale. Thus, we could be able to introduce the force and voice of movements and of those who are fighting every day to improve their conditions into this institutional dispute.

Few things, therefore, need to be clarified: the ECB threat of cutting funds to Greece produces the concrete risk of a default, which entails the impossibility for the Greek State to pay wages and the public services which remained after the privatizations imposed by the Troika. Draghi knows that the power of portfolio is decisive and he uses it advancing technical evidence. The Troika is fighting to survive and cynically hopes that massive queues in front of automatic teller machines would be more effective than a massive presence in the squares. In order to face this politics of fear, it is necessary to say, without hesitating, that the payment of wages and of basic services comes first, before any budget constraint. We know that the economy of debts is not based on the actual capacity of paying it off, but on the political judgment about this capacity. European institutions and governments are now confronted with a political choice: they can throw down millions of people who already have been dramatically impoverished by the crisis, or they can avoid to do it. Thus, the question is not how far from Syriza, or how near to Syriza, and its self-proclaimed emulators we are. The question is to choose a side in front of this politics of systematic impoverishment: our voice must be loud and clear. The question is to practice on a European level a politics of the governed against the government of economics which pretends to decide on the life of millions of men and women, on the basis of a presumed technical legitimation. This is the only way in which we can use productively the tension between movements and government, as it is occurring in Greece right now.

Some of the public policy measures already announced by the Greek government are consistent with the claims advanced by real movements during last years. The increase of minimum wage – which was reduced by previous governments – the re-establishment of public services (like transports) and indirect income, the end of special programs for the deportation of migrants and the establishment of citizenship rights for the new generations on the move; a redistributive fiscal politics and the reform of the labour legislation which left the investors free of doing whatever they pleased against the workers; the recognition of the self-organized structures of solidarity established during the crisis, the block of privatizations and the removal of the chief managers of the TAIPED, the agency established for the discount of the State assets, are some programmatic points that go well beyond the Greek borders. The current clash is not about debt and money; rather, it is a political struggle on these measures.

In front of this situation, it is necessary to say, without hesitating, that the European space is not limiting our action, but is rather pushing our action on a higher level. If we continue to conceive it of as limit, we are not able to grasp the current phase and to understand that the alternative is – to use a slogan – Europe or barbarism! Within this scenery, we have to choose between keep on tending our own knitting while chatting about revolutions still to come, or to stop the delay. The point is not so much that of defending the Greek government, but to contaminate the uncertainty and tension determined by its politics to Europe. The point is not to perform conflict on the stage of some square, but rather to practice it on its real scale.

To practice this conflict means to take up the opportunity opened by Greece, by leaking in the space that it created for action. It means to raise political priorities which could meet the ambitions of workers living in every place of Europe. We want European minimum wage and basic income, that could both support the Greek workers and contrast the precarity and low wages of everyone else. We want a welfare that should grant specific services everywhere in Europe, beside national citizenship. We want that the self-organization of solidarity and reappropriation are acknowledged as politically legitimate, when basic services are not granted. We want a two-years European residence permit for all migrants, independent from labor and income, and the abrogation of the Dublin II agreement on refugees politics.

In the last hours we apprehended that the opening ceremony of the ECB building in Frankfurt on the 18 of March will be not a parade of prime ministers, but will be reduced to a toast among technocrats. This change of program is clearly a success of the Blockupy movement, and it is not for chance that the decision was communicated in these days. However, this change is also an opportunity for movements, networks and coalitions who shared the European dimension of the Blockupy coordination and for those who did not catch sight of its potential yet. We can turn European politics against the European monetary institutions. We can turn against European governments and elites their active role and commitment with those politics. We can turn the current institutional clash into a chance for meeting the expectations and improving the organization of those – like precarious workers, factory workers and migrants – who in the last years have fought to improve their conditions and refuse the logics of austerity, according to which there is no alternative. We believe that we have to transform the initiative of the 18 of March in Frankfurt. We cannot simply protest against the ECB. We have to pretend the ECB be accountable for its policies. We will ask: what did you do to Greece? What are you doing to Europe? We will not accept whatever technical answer. In the forms and ways that will be collectively decided, we have something to say. We can bring Athens to Europe, and we can finally turn Europe in our real field of action.