A Precarity Office in Vienna: notes from the start of an experiment 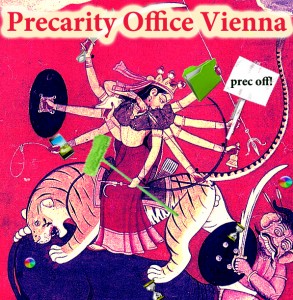 With the Precarity Office we open a monthly space for giving mutual advice about labour- and migration related issues and for discussing and developing self-organisation practices. As migrants and/or precarious workers we perceive the need for a space to get and give informal advice, meet and discuss, hear about our respective struggles and develop them further. We call this space the ‘Precarity Office’ – inspired by similar self-organised initiatives in Spain, Italy and beyond – and will open it once a month for now.

Anyone is welcome to join us to get and share information or advice, for a tea or beer, to discuss precarious living and working conditions, experiences of crisis and migration, as well as strategies for struggling together. We’re not official legal advisors but persons engaged in campaigns around labour rights, migration and the current crisis. We speak many different languages, are happy to translate and try our best to make useful information accessible. We would love you to share your knowledges, skills and questions and join us. From this space we are hoping to see a network grow, through which we can support each other and collaborate.

The Precarity Office in Vienna is an initiative that takes as its starting point the current conjugations of precarity, migration and crisis. It departs from the shared needs and desires of local precarious workers and/as new European migrants, and emerges as a fresh social-affective composition that seeks to activate new alliances across the geographies of migration and precarization establishing themselves on the continent. The point of anchorage in this proposal is the struggle for rights, collective agency and affective resistance. What follows are the impressions and reflections from the early days of this initiative.

Three groups initiated the Precarity Office together. What they have in common is a desire to establish a transversal point of anchorage and encounter in Vienna, to engage and further connections with ongoing struggles in different places, and to map out some coordinates and cruxes of the current European and global situation.

On one hand, Juventud Sin Futuro/Marea Granate Viena: people more or less recently arrived from the shores of crisis in Spain, making clear that they’re ‘not leaving, but being kicked out’ by crisis politics. The inaugural action of the Vienna JSF node on 7th April 2013 was entitled ‘No nos vamos, nos echan’ – ‘We’re not leaving, they’re throwing us out’. As the 15M movement sees its methods and models travel and replicate in various global cities, its fresh political spirits also circulate with those who had to pack their bags. The energies and knowledges at play here are considerable and often rather contagious. Linked to these trajectories, the Spain-based ‘Oficina Precaria’ is obviously an inspiration for the Viennese Precarity Office, and exchange with the Madrid nodes is ongoing.

On another hand, Solidarity4All: a Greek alliance of self-organised initiatives, partly funded by Syriza yet autonomous in its decisions, which is growing nodes across the world currently. The Viennese S4A is a gathering of people who more or less recently left the Greece and set out to connect struggles across there and Austria. They organise to raise awareness and support for Greek movements, build coalitions and get things moving across Europe, driven by the urgency of the current political and economic situation.

On yet another hand, there is the Prekaer Café. (We are talking about a multi-manual monster here, in line with precarious multitasking and an alliance of needs and actions) Not taking a shared understanding of precarity for granted, the project so far has taken care to define and question this concept. The Vienna-based Prekaer Café has a history with this matter as a group that emerged from the EuroMayDay in 2006. They deal with precarious knowledge, care and undocumented work notably. This group brings the reference point of the Punti San Precario model in Italy, and experiences of past tentatives of transeuropean struggles. They also contribute local connections and legal-institutional knowledges to the project, as well as the regular space of the office in a social centre.

The proposal of a common space shared across those and more actors addresses three levels primarlily. On the one hand, most immediately, it wants to be a platform for addressing labour and migration-related rights in a collective and politicizing setting (we’re not legal experts and do not intend to replace existing and well-funded advice NGOs and institutions). On the other hand, a space where people can meet, exchange and support each other in their struggles – to get organised, network and join forces. On a third hand, to address the European situation and make sense of common ways of struggling and making proposals – across the different experiences and situations that center/periphery relations currently imply on the continent. Surely there are more hands involved in this project that the author can offer here.

The ongoing loss of social, labour and migrant’s rights provides a backdrop for us to collectively research and revindicate existing rights and think them further. Remembering that rights are products of struggles, we see the Precarity Office as a space to map out differences in their current decompositons, and to learn from each other about the struggles that confront them accordingly. The basic gesture of helping each other out with legal frameworks brings with it the telling of stories and conditions, narratives that we want to listen into and orient our work by.

In this moment of crisis, what demands and perspectives around mobility and work might we jointly put forward, what social rights might we fight for across borders? These questions are there in the background, yet we’re not mainly setting out to discuss or decide them but to experiment with some conditions for asking them. It seems clear that thinking beyond the welfare state in this respect has to depart from minor practices and the building of new relations. The dilemma around rights and welfare is that of contemporary Europe: the EU project has implied not only hegemony but also some new rights, open borders for residents in the territory and strong cultural networks across regions and beyond nationalism. That possibility of travelling, working and communicating across the continent with relative ease is also what brings many of us to Vienna. Incidentally, Vienna is not just one of the bubbles of prosperity and employment in the face of the crisis but also one of the hubs of European capital reaching out to the east.

The composition of people present at our opening night reflected this. Alongside old and new transcontinental migrants there was a certain majority of old and new European migrants. The Precarity Office might thus emerge to be a space to question and map out the Euro-territory as it is today, in all its ambivalence. The social and the hegemonic are hard to disentangle in this territory called Europe or EU, manufactured and managed as much as fought against/over/for. A contradiction that might be rendered productive in thinking about the new rights we can affirm in experimenting ways of fighting locally as well as transnationally and globally. But rather than start with big abstract questions, with this project we start from where we are, from everyday situations conditioned by the powerful contradictions of Europe and indeed globalization.

The Precarity Office may be seen in the light of the need for new common institutions that operate across and beyond national boundaries and address the current multiple crisis in Europe, addressing local needs. This kind of experiment implies not only to look at different recompositions of class and to translate back and forth between a country with a still solid middle class such as Austria and other places where the middle has been cleared out. It also implies grasping different speeds and forms of neoliberal reform and financialization via austerity programmes as well as neighbouring histories of privatisation and debt: the politics of debt in Yugoslavia and Africa for instance. As discussions during the opening night of the Precarity Office showed, it’s hard to disentangle our respective struggles and demands of rights without arriving at broader social, geopolitical and economic questions.

A nice space of encounter

The feelings of isolation and loneliness – as precarious workers and migrants but also as conditioned by the bubble-like quality of life in Austria – is another thing this initiative sets out to undo. A certain need for a different kind of affective and meeting space – beyond distrustful politics and fixations on identity – underpins our experiment. We want to create a space for people to meet each other and network in a friendly, informal and convivial setting, and to engage pedagogies and methods for self-organising in learning from recent movements. Thus to function as a sort of transistor space for different energies and experiences. At our opening evening we collectively cooked and presented three short films about self-organisation and struggles from the UK, Spain and Greece. There were people from over 15 countries and the films sparked a debate that brought forth many resonances and stories from different contexts. We also touched upon another crucial question: and what does it mean to be here, now, in Austria?

A third point of this project is to grasp how we may situate ourselves in the context of Vienna and Austria in the current moment, whether we have lived here since a long time or just arrived from the shores of crisis. There is not much of a sense of crisis in Austria, beyond an abstract debate, and the fact of deteriorating labour conditions as well as the position of migrants within these is often still perceived as more of an exception than rule. It’s not easy to burst into the bubble of Austrian social-democratic consensus with the news that much is going to hell elsewhere, and that elsewhere is also here, already now – especially if you’re intending to go beyond scaremongering and discuss viable alternatives on the global-macropolitical as well as everyday and microorganisational level. While southern Europeans speaking of the crisis encounter much solidarity on Austrian grounds, the profound disconnect between situations in the dismantled periphery and the comfortable core of Europe remains apparent. However realities in the bubble too are changing, and perhaps some things can be anticipated together.

In any case, first of all our aim is to set up some kind of common: an office, a clinic, a practice, a set of tools, a base, an address. For now the Office will be open every first tuesday of the month from 6pm. 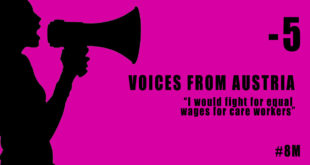 For the critique of the political economy of mobility. Remarks on the new constitution of Europe 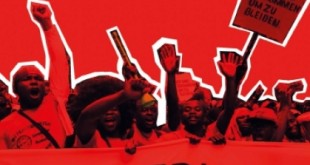