In retrospect. In memory of «unknown citizen» 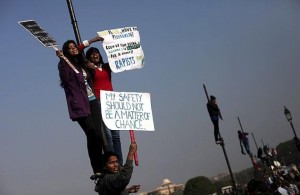 We woke up to the death of the 23 year old student who was gang-raped on a moving bus in Delhi. We are terribly angry, upset and it’s a mixed bag of emotions. It is extremely personal. I feel a terrible sense of loss, fear, and hurt. As my mother puts it, «Little did she know when she stepped out on 16th December that it would be her last movie?». As I gathered myself to pick up the emotional blocks, I decided to join the peace vigil in Jantar Mantar.

Today, the student organisations, civil society groups who have keeping a close watch were forced to restrict their peaceful protest in Jantar Mantar. The State managed to curtail the protests and peace marches by clamping Section 144 CrPC in New Delhi District. Not only did the State administration clamped Section 144 CrPC to curtail protests but as a measure also closed down 10 metro stations. As the metro zipped by the stations that connect to central area of Delhi, a passenger commented, «Why close down metro stations? This is not the way to control protests. Jisko jana hain wo log paidal chalk e jayenge [Whoever has to reach will walk down]».

We have witnessed such determination among protesters who braved the closure of metro stations and reached India Gate and various other places to reach venues of protest. On 27 December 2012, the citizens’ march to India Gate was stopped at quite a distance from India Gate. As we marched and we were welcomed by a sizeable police force who asked us to stop at the barricade I wondered… «Wow I didn’t even know that this sizeable number of police force exists to “protect” us».

Today, students, individuals holding placards and posters walked up to Jantar Mantar and people gathered to mourn the death. While some held placards demanding death penalty, the general feeling was that people are tired of reading reports of gender based violence across the country and feel something has grossly gone. Yes, something has been going wrong with the way we are socialised as men and women. A death like this, once again affirms that we have collectively failed as a society to ensure equal rights of women and men, and most importantly we failed to uphold the rights of women as human beings, not as mothers, not as sisters, not as daughters.

Why deaf? Far away from Delhi, an 18 year old girl committed suicide this week because of police inaction. The police not only lodged a First Investigation Report after 14 days but reportedly harassed the girl by calling her to police station in the evenings and asking her to narrate the incident.

If that is not enough we also have our dear elected representative from West Bengal Mr. Abhijeet Mukherjee commenting on protesters in Delhi as «dented-painted women» and not students. Hang on readers. There is more from Bengal. Communist Party of India-Marxist leader Anisur Rahman had ridiculed the Chief Minister, Mamata Banerjee’s government’s decision to compensate victims of crimes against women like rape and trafficking. He said, «We have told the chief minister in the assembly that the government will pay money to compensate rape victims. What is your fee? If you are raped, what will be your fee?».

The list of objectification, comodification and moral policing of women is endless and politicians react to gender based violence across states in India. If we did not have enough we had another representative from moral policing brigade who said that skirts should be banned in schools in Jaipur «to reduce chances of their being subject to lewd comments or harassment».

So, a death of a 23 year old unknown citizen once again bares it all… the real picture of «Incredible India».