From precarious workers to precarity: to say both farewell 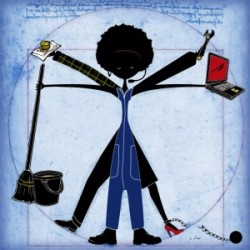 The issue of “precarity” has become central to all debates regarding labour, economics and society. The category of precarious workers is associated with those who work with limited-time contracts, people hired through employment agencies or people who have no contract whatsoever… In this way “the precarious” tend to be more discussed than precarity itself. They are regarded as an isolated category of men and women, usually young adults, strange animals that can be found in specific habitats: call centers, service cooperatives, schools and universities, small and large distribution. Precarious workers have also a sex: women are more precarious than everybody else – they have always been precarious! – and the problem seems to be how to support them so that they could remain precarious, though more steadily.

The fact is that precarious workers have never been a category. Precarity is not a sector of the labour market, it is the general condition of contemporary living labour. Precarity is not a matter of the lack of stability of the individual worker on any particular job, it is a matter of class, because it is an expression of the relationship between labour and capital.

If precarity is the condition of all labour, it cannot be enclosed within national borders or viewed from a solely European perspective. Mobility of labour and capital is the measure of the organization of contemporary production. From the construction sites of Dubai to the factories of the Italian north-east, from the factory farms of the Mediterranean to the skyscrapers of New York and Singapore, from Libyan oilfields to the households of the planet, the blackmail of residence permit and the fear of being illegal have made migrant labour into a testing ground for precarity for all workers. At the same time, wage differentials betweeen the one and the other side of the borders allowed externalization of production as a fundamental lever for the weakening of rights and of power of National labour-force. Precarity is global because it is built on the crossing of borders, but also because it is the condition of labour in every corner of the world. In some cases it is the effect of capitalist processes of innovation that seek to reach ever increasing levels of competition, of State-sponsored deregulation supported by supra-national structures that render labor precarious in order to respond to the increasing precariousness of the production of profit. In other cases it is the price to pay for entrance into industrial labour: not a “degenerated” form of labour but its distinctive trait, port of access not only to economic development but to economic gigantism: the I-pad, typical instrument of “cognitive” labour, remains a product of the exploitation of Chinese workers, who are not a vestige of fordism and without the likes of whom it would be impossible to understand precarity today. And what to say of kindle? Under close observation it seems to be a living relic of fordism, an out of place artifact in the era of cognitive postfordism: like Henry Ford’s model T, you can buy it in any color you want, so long as its gray. The only difference is that there isn’t a boss willing to give you five dollars a month in order to be able to buy it, and this is no small difference. It’s not a question of identifying the most advanced points of production towards which the whole world is moving, but of understanding that precarity is a stable, global, social fact.

If precarity is a social global fact and if precarity is a class matter, because it is the contemporary form of the relation between labour and capital, then the answers to these issues have to be equal to the complexity of the situation and of its contradictory nature. Every precarious worker is caught in an unbearable balance between an ever compressed salary and an income which is more and more influenced by employment. The certainty of a minimum unconditioned income (however calculated) undoubtedly enables the worker to reject the “salary racket” and to manage, at least partially, his/her own precarity. For all these reasons we share the unconditioned basic income claim. At the same time the enjoyment of those goods and services, which are an indelible part of individual and collective welfare of all the precarious workers has to be constantly and strongly reclaimed. Nonetheless we are well aware that income and welfare are not rights, but they are what is at stake in a struggle that in this right moment would not even be able to identify its institutional counterpart. The inexorable decline of nation state sovereignty is also determined by the necessity to deconstruct existing welfare systems, while in the meantime transnational powers – first of all the European Union- tend to subordinate the welfare of precarious workers to the profits of banks and of stock markets.

On the other hand it is not any more desirable to place the state or transnational bureaucracy in the position of having to handle and guarantee the dispensation of welfare, new or old that it may be. We also know that the reconfiguration of welfare systems produces precarity, forcing the paying of salaries (minimum salaries) to care-takers and all workers, migrant as well as non, who offer person-to-person services. And the precarity of personal service jobs is no different than that of services to companies. We therefore know with certainty that there is no power which can guarantee rights. That problem is ours and ours alone. We cannot remove ourselves from the coercion of wage labour by making basic income the only alternative, among other things because we know that every single product purchased with that income is produced paying a salary. The struggle against the global omnipotence of profit must instead continuously move along the line between income and wage, showing it for what it is, an intolerable sword of Damocles dangling above the heads of the precarious. Neither a minimum wage nor a basic income are sufficient to compensate for precarity, just in so far as salary is not a “remnant”. It is determined by a power relationship, it is a life-or-death question for those who cannot escape it.

Solutions are part of the problem. One cannot resolve a relationship of force that is rendered systematic through laws, rights and jurisprudence through a strategic use of the same laws, rights and jurisprudence. Italy’s most recent economic maneuver is just the last development of a process that has been going on for years, a process which was unsuccessfully opposed through the defense of the national contract and the constitutionalization of labour relations, an approach which transformed class issues into citizenship issues to be resolved, eventually, in court.

Just as the the link between labour contract and the residence permit renders it possible to fire a migrant worker with a permanent contract, now it is sufficient for the main unions to sign an agreement to send home women and men reduced to just-in-time labour. It is ironic that there is a general appeal to union representation in precisely the moment that its crisis is most evident. The condition and the behavior of precarious workers constantly brings out the fundamental contradictions of union representation. While hundreds of thousands of workers, women and men, have taken to the streets in the strikes of this year, they have been forced in the same numbers to give in to the blackmail of precarity and remain chained to their jobs. The price is payed by all, with the consequence that even a successful strike can be written off as insignificant. It is for precisely this reason that we see the urgent need for a strike that demonstrates the capacity of precarious workers to show their power to damage profits.

To pose the problem of reversing the power relationship between precarity and profit means positing  the problem of building forms of communication that as of now do not exist in the world of labour. It means comprehending that precarity, despite being a common condition among all workers, is a condition that divides. The production of profit imposes an organization of labour that disconnects and connects workers: labour is increasingly fragmented, marked by differences and hierarchies that are founded on contract, gender, ethnicity and citizenship.

But labour is also universally under capitalist command, however decentralized and de-localized it may be. The wager therefore, is that of breaking through the isolation of workers, starting from the differences that divide them. It is a question of demonstrating the global ties between the figures of precarity, and from there imagine forms of struggle that can do the most damage, hit where it hurts the most, there where capital is produced and reproduced. There is no pretense of representing labour in the name of its supposed unity, or of engaging in symbolic forms of conflict. Connecting the disconnected, producing communication where there is none and it is needed. That is our wager.