The Government of Mobility 4. Germany, Europe, the maze of inclusion 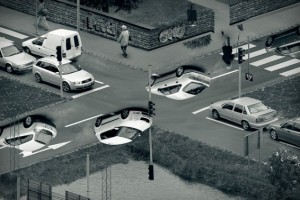 The German welfare system is as segmented as is the German labor market. There is an unemployment-insurance for long-term workers and a welfare system for temporary and precarious workers. To receive welfare one has submit to the regime of the Jobcenter and to apply for any work or participate in any training proposed by the Jobcenter. Noncompliance is fined with cuts of 30% of welfare benefits.

German welfare law excludes European citizens that do not work or are not self-employed in Germany. It especially excludes those who are looking for a job in Germany. This exclusion was heavily debated by German courts for many years. There is still a case pending at the European Court of Justice on the question if this exclusion by German law is compatible with European law. German courts have split opinions about it and it is a question of chance if benefits are granted or not.

In December 2014 Germany’s law of residence for Europeans was changed. From now on European migrants who are looking for a job in Germany are legally entitled only to stay for 6 months if they do not have money to support themselves. Afterwards they have to give proof to the alien’s department that they have a «genuine prospect of getting employed». What kind of proofs will be accepted apart from a work contract is not clear.

This change was part of a package of changes. In the preamble the government stated that these changes were necessary to fight «legal abuse and fraud of law of residence, black work and illegal employment, and of child benefits. At the same time the municipalities will be further discharged because of the special challenges due to increased migration from other EU-member states». [Der vorliegende  Gesetzentwurf verfolgt das Ziel, Fälle von Rechtsmissbrauch oder Betrug im Zusammenhang mit dem Freizügigkeitsrecht, im Bereich von Schwarzarbeit und illegaler Beschäftigung sowie bei der Inanspruchnahme von Kindergeld zu verhindern und konsequent zu ahnden. Zugleich werden die Kommunen wegen der besonderen Herausforderungen, die sich aus dem verstärkten Zuzug aus anderen EU-Mitgliedstaaten ergeben, zusätzlich zu bereits beschlossenen Hilfen weiter entlastet]. The other changes include an introduction of the possibility to ban people who lost their residence status to re-enter Germany. The ban is possible in cases of violations of the right of residence like feigning the requirements for obtaining the right of residence.

The change of the law of residence affects the right to welfare. Because even if the European Court of Justice rules that Germany’s exclusion of European jobseekers is incompatible with European law, the right to welfare will be restricted to 6 months (3 months actually as the exclusion for the first 3 months seems to be compatible with European law). That is the real reason behind the change of the law of residence: the German government was not sure to win the case at the European court and it wanted to make sure to restrict welfare benefits to European migrants as far as possible. By shifting the question of right to welfare to right of residence it shifted from the welfare administration and the social courts to the alien’s department and the administrative courts. While a lawsuit at the social court is free of charge and the administration loses more than 50% of cases concerning unemployment welfare benefits at court, lawsuits at administrative courts cost money and in 90% of cases the courts support the administrative decision.

The law was changed at a time of intensified racist discourse in politics and media on migration from Eastern Europe implicitly focusing on Roma-people. Increased migration from Eastern Europe was blamed on «welfare tourism». While EU-migrants were targeted as welfare fraudsters, non-EU-migrants were targeted for presenting themselves as refugees. Increased migration of non-EU-Europeans as refugees was blamed on a judgement by the German constitutional court in 2012. In 2012 the constitutional court of Germany has rejected Germany’s discriminatory law of granting refugees only a fraction of the «minimum living standard» Germans (and EU-Europeans) are entitled to. Interestingly the judgement stated that people who are legally staying in Germany cannot be excluded from a «minimum living standard» as this is unconstitutional Germany being constitutionally a welfare state [Sozialstaat]. The implications of this judgement for EU-migrants are not clear yet. To exclude non-EU-Europeans from claiming welfare Germany has changed the law in September 2014 and declared Serbia, Bosnia and Macedonia as «save countries of origin» and thereby making it impossible for these citizens to obtain a refugee status in Germany. Here again we see the shift from questions of welfare to questions of residence.

This hypocritical stance is paradigmatic for Germany’s European policy.