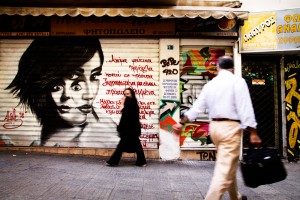 After his comment before elections, we now publish another note by Akis Graviilidis concerning the situation in Greece after the oath of the first SYRIZA government. Almost laughing at the anxieties of those who see their principles and expectations at risk, Akis discusses the political question of the possibilities that the victory of SYRIZA actually opened. We believe that this political remark is really important. To start from the movements that this victory is able to trigger, in fact, helps avoid arguments which presume that nothing can really change, as if political subjects were always the same.

1. My second note about the Greek elections, this time after the fact, will necessarily be more fragmentary and impressionistic. And also, more affective. Which does not mean superficial (I hope).

The first affect that comes into mind is relief. People who did not live in Greece, or even visit it occasionally, the past years, cannot imagine how unbearable the Samaras administration had become, from a political, but also an ethical and even an esthetic point of view. It is hard to explain the feeling of suffocation produced by this domination based on fear, hatred, self-underestimation, and almost all other negative passions, compensated on the imaginary level by an overdose of nationalistic self-glorification and vanity.

On the other hand, it is very easy to find abundant examples of the aggressive and reactionary stupidity that had replaced any decent – even conservative – political thought and action with the government we got rid of. To begin with: no later than the first day after the election, after Alexis Tsipras had announced his intention to take a civil, not religious oath as the new prime minister, the New Democracy party spokesperson accused him for «ostensibly ignoring a centuries-old tradition of the Greek Nation [capitalized in the original], whose course is intertwined with Christian Orthodoxy».

On top of that, what has been honestly obscene was that these adepts of xenophobic, heteronormative parochialism had managed to persuade the European elites, and also themselves and large parts of the public opinion in Greece, that they are «Europeanists», as opposed to SYRIZA who are «anti-European». As for Samaras, who on January the 10th had traveled to Paris to demonstrate along with the other clowns that «he is Charlie» too, he only returned to Greece to continue his campaign by asserting the Greek people he will make sure «the holy icons remain hanged on the walls of Greek courts, in spite of the evil plans of the SYRIZA atheists to remove them».

This cliché about SYRIZA’s «anti-Europeanism» was well established among media people, including former TV anchorman and current founder and leader of the peculiar political formation called TO POTAMI (the river) Stavros Theodorakis, who, after the elections, urged Tsipras «not to derail Greece from its European course». Of course, declaring one’s determination to fight against a non-existent danger is the best way to create the impression this danger is real. But this otherwise uninteresting petty-politician trick is worth noting as it testifies for what I was referring to in my previous note under the term «self-colonizing» mentality –or for what Lacanian scholar Yiannis Stavrakakis has recently termed as «our European super-ego». The poverty of Theodorakis’s statement is predicated on at least two problematic points: a) he conceives the relation of «Greece» to «Europe» as an external and exclusively passive one, as a one-way path of command and submission; b) on top of that, he identifies «Europe» and its demands to existing extreme neoliberalism. He cannot even conceive the possibility of antagonism and of contending different views about a common future to be mutually agreed upon.

This is why he is a poor politician, the same way as he was a poor journalist. Because, out of fear and self-colonization, he misses the most important: his political imagination and ambition can never go so far as to think that the point here is no less than derailing Europe from its «Greek» course (which, at the same time, is its Spanish, Irish, Italian, Portuguese, Belgian etc. course).

Many people express disbelief and doubts whether «this will be easy to achieve». Of course there are many obstacles and difficulties. But this is the wrong question. Because it only conceives of political events in an instrumentalist way, as means to an end: we try to first «take power» in order to bring about some «material results» afterwards. In some cases at least, (and this is certainly one of them), we have to take stock of the – very material, not «symbolic» in the negative sense – results that the very event has produced, independently of any subsequent developments. Something that this victory has already achieved, no matter what happens later, is that it has articulated a political desire for the first time; it has put on the table and made a legitimate subject of discussion something that was not considered an option before.

This result was most aptly summarized by British Prime Minister David Cameron in the following way:

The Greek election will increase economic uncertainty across Europe.

2. Another topic which needs to be commented on is, of course, the collaboration with the «Independent Greeks» for the formation of the government. Many people, in and outside Greece, see this as an obstacle and a burden for the implementation of a «purely leftist» program. Of course I too would find much preferable an absolute majority for SYRIZA. However, one has to work with what one has before them; people make history in conditions they don’t choose themselves.

In this context, we also have to take into account the following fact. As I was saying in my previous note, we should not believe that two and a half million people voted for SYRIZA because they were won over by the ideal of anticapitalism or some other set of principles. For many of them, this vote was a line of flight. Nothing more, but also nothing less than that. This kind of attachment may sound opportunistic or confused, but, under certain conditions, this fragility may prove a source of force. In any case, even if SYRIZA had a parliamentary group of 160 by itself, this group would already be a mixed, not monolithic one; even before the election, Tsipras was criticized by purists within and outside his party for accepting as candidates people who had until recently been members of other parties, including «Independent Greeks» and PASOK, as these people did not share any common ideals or struggles with SYRIZA activists. Given the result, it now becomes clearer that there were two options: either accept these people as candidates of your own party before the election, or have to collaborate with them as MPs of a separate party as partners in a coalition afterwards. All things considered, tactically the first option is far better: when somebody has been elected with SYRIZA, in principle s/he owes loyalty to this party’s guidelines and has less margin of imposing conditions on it.

In any case, even by forming a coalition where SYRIZA is the main force and the other party represents only 4,5%, it is the latter that will be put under constant pressure. For at least some months, everybody knows that, if the I.G. decide to withdraw their support, it will be them who will be blamed for the collapse of the government and a possible new election will most probably give an absolute majority for SYRIZA to govern by itself. So this appears to be a «win-win situation», to use a manager’s parlance. Provided, of course, one shares the perspective of forming a government. If, on the other hand, one prefers the isolationism and the autistic attitude of the sect that calls itself «the Communist Party of Greece» but in fact has not even a remote connection to communism, or to anything common, this dilemma is not posed at all and it’s pointless to argue.

From this point of view, SYRIZA’s tactics constitute an «epistemological break» within the history of the Greek Left. Not only because its new Education Minister will be Aristides Baltas, a scholar having extensively taught and published i.a. about Louis Althusser, Spinoza, and Wittgenstein, but also because it follows the essential lesson of Asian martial arts: the good strategist is not the one who crushes the enemy’s forces, but the one who uses them in his/her own favor. This way, it breaks a long tradition – perhaps the only tradition – of the Greek left: the conception of separateness, the concept of the «fortress party», as the only possible form of leftist politics. Up to now, this politics had almost exclusively organized itself on the founding principles of unity and purity, and considered «pluralism» as an insidious weapon used by bourgeois ideology in order to undermine and bring discord in our «camp». Now it is the first time when somebody tries to abandon uniqueness (or duality, which is practically its synonym) and work with multiplicity as a means to increase their strength and bring about a transformative and emancipatory effect.