The summer of our dismay. Greece, Europe and transnational struggles 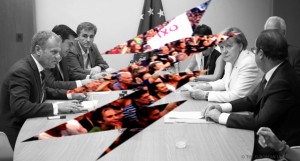 This is not a coup d’etat. Undoubtedly there has been a de facto unilateral imposition that completely ignored and thus erased every trace of the Greek referendum. However we need to say that there was no State to hit since long time: dissolved by the pressure of debt, with an impossible sovereignty, with 1/3 of its people living outside of a national territory often controlled by capitals coming from other States. Therefore we cannot be content with the reading of the Edict of Brussels as a coup. To do it would mean continuing to cultivate the illusion which infected quite enough people, also in our political latitudes, who interpreted the OXI referendum as the revenge of democracy against transnational finance. Just as they saw the referendum as the act of a people – finally sovereign again – against the vexations of the European financial governance, so now they are seeing Europe raging against the peoples. This faith in the power of the peoples could even have edifying contents, if it only took into account that that power dematerialized in front of the harsh impositions dictated by the agreement between the European leaders and Tsipras, and if it did not end up overlooking the fact that democracy, sovereignty and its people are part of the problem and not the solution. On the other hand, also in Greece in these hours someone is daring to observe that above all hundreds of thousands of precarious are being sacrificed on the altar of what remains of the Greek State and its people.

The total impermeability of the Eurogroup in front of the proposals advanced by Greece has been evident since the beginning. With obstinate cohesion the position of Schäuble & Co has remained unchanged even after the referendum. The financial command of Europe has mocked the democratic regime which the sovereign will of the Greek people should have reactivated. Financial governance plus Sovereignty and Democracy of the Eurozone: here it is the perfect formula of the coup, whatever Tsipras’ destiny is. The value of the referendum rested on the practical critique of the debt-democracy, a form of government «typically European», thanks to its capacity of making the national system of democratic representation coexist with the transnational institutions. The debt is what has made and makes possible this alchemy between Europe and its States, between a waning and intermittent sovereignty and its negation. The material mechanisms which reproduce continuously this European constitution are the wage regime and the government of mobility. Then, the significance of the OXI on the 5th of July could not be confined to the stance of the 61% of the Greeks, because it posed to an infinite multitude a question which was until then unacceptable: «so is it possible? Can we really get rid of the tyranny of the debt and its maidservants?». This is a question which is more uncomfortable for the social-democratic doves than for the liberal hawks, for Holland more than for Merkel. Therefore it is not the case to further  indulge  in the Germanophobia of these days. It is true that there is a memory of the fear that reactivates in front of the possibility that for the third time in one century Germany could try to impose its order in Europe. And yet the situation is not like this. We are not in front of the revenge of a single governing class. We are not in front of the absolute force of a national economy, but rather of an economy which occupies a strategic position inside the global chains of production that cross the new European logistics. Germany is not a scandal as hegemonic power in Europe, but because, as a State, it legitimizes a European constitution where the States work as a constant repressive supplement of the democracy of the debt. Germany is a scandal because it prevents  Europe to say farewell to its nation-State-like past. We are facing the paradox of an Edict that, decided by a couple of governors, will have to be voted by the Greek Parliament and by the Parliaments of other seven States which would not have objected nothing to the Grexit. This is the political Europe.

In front of this political Europe, we must acknowledge a defeat. But it is not enough to say that Europe is over because its constitutive values of solidarity have been lost during a long-lasting Belgian night. The new challenge is not to escape the European frame through improper chimaeras of sovereignty and nationalizations, or even nationalism. From a long-lasting night full of terrors, in fact, the Europe of financial capital came to light, dripping with blood and filth. Europe revealed itself and exhibited a capacity of exercising command which was somehow surprising. This is the political Europe that the united social-democrats of all the world yearned for in order to soften the excesses of a Europe simply conceived of as a monetary union. After all, it is not a secret that the crisis-management is one of the main factors of every good governance, actually its constitutive factor. Besides the tensions and oppositions that SYRIZA’s gamble produced within the European context, the cohesiveness of the EuroSummit reveals the consistency of a political project. While it punishes the unreliable and irresponsible dissenters, this project produces devices for governing capitalism that are integrated within the European constitution and innovate its functioning. When a death-or-life conflict took place, it was neither around the details of the agreement, nor around the acceptance of the neoliberal program, but rather on the possibility of radicalizing the mobile character of the European space. In other words, it was about the Grexit pursued by Schäuble-the-hawk. In front of this perspective, the specter of decay had the upper hand. However, once the great decision of refusing Grexit was taken, most of the opposition that occurred during the night orgy – when Tsipras, as the rumors say, was «crucified» – was made of lowered gazes. Now Europe has a «best-practice» for the management of recalcitrant countries, a «typical European» method as the well-known tax-consultant Juncker said.

But what is appearing is all and only force? Is really this Europe the monolith that the Belgian night represented in front of the world? Actually, during that night it was clear that they are terrified of the possibility that someone could escape the grasp of the debt. The incapacity of reaching a mediation, the proposal of a solution, which is already five years old and which will fail again: are these acts of force? We assume that these seeming acts of force are full of uncertainty and that in this very situation it is possible to slide the hard crust of the European constitution. This is why we pose the only question we are interested in.

What about us? What can we nurture now, beyond a useless disappointment? What about precarious, industrial workers and migrants who put their hope in the Greek referendum? What about the multitude of OXI after the Edict of Brussels? Tsipras promised that those who made profits from the crisis will pay. However, he subscribed a document which imposes the reform of the pensions and of the VAT systems, of the labor market, of collective bargaining, the introduction of collective dismissals and an incredible program of liberalizations and privatizations. This is the «catalogue of atrocities» of the Edict of Brussels. Austerity after austerity, austerity producing austerity through austerity. And a repeated question: why should now be successful what previously failed? After all, it is not even certain that these measures will be finally approved.

We are not interested in debating about Tsipras’ damnation or beatification. The only alternative was a Grexit that, under these conditions, would not have been autonomous anyhow. Furthermore, are we sure that a presumed liberation from the European yoke would have opened the doors to a welfare produced through nationalization? Can this question be made, in a situation in which it was not possible to hope for an insurrection? We prefer to leave this debate to those who thought that Greece was the weak link of the chain and now, rather than acknowledging that the chain was tightened without any opposition, complain that the link was not broken. We believe that the main question today is: what could the politics of the multitude after the Brussels Edict be? In Italy we already experienced what those policies mean, even though they have been imposed through a softer compulsory administration: growing impoverishment and increasing subjugation of the governed to the financial capital of Europe. This is the fate of precarious and industrial workers and migrants, the fate of all the European proletarians, which impedes to speak of a unitary Greek people. However, if the resignation to the truth of the debt is the ideological foundation of the European constitution, we are not going to resign.

The European space is still the minimum field of a transnational class initiative, because this is the minimum scale of the power we have to contrast. Now the point is to understand how that field has been transformed both by the OXI of the multitude and by its defeat. In other words, the point is to understand how the precarious and unstable link between the opposition to financial command and the political expression of this opposition – which was able to intervene also on an institutional level – can change what seems to be an unchangeable fate. The Edict of Brussels did not end history. Rather, it opened up a new phase in which the dialectic between reform and revolution grasps only a face of the problem without pointing to the solution. For the first time, we have been in front of a shake of the process of institutionalization of debt-democracy. So the problem is: with which forces, and with which discourses, will we face the next shake, the next rift on the surface of the European financial capital? The enthusiasm raised by the Greek referendum, the possibility of a release that it surprisingly pointed out does not solve the problem of our really existing capacity of turning enthusiasm into a political initiative. Perhaps today it seems that the occasion of an OXI has been irreparably lost. However, we still believe that this occasion clearly exposed a line that now we must follow and deepen. The «NO» must necessarily have a transnational form, because this seems to be the only way for deactivating the double trap of a debt-democracy and of a double-edged sovereignty. The democratic problem is our problem, the rise of nationalist and xenophobic forces is our problem, but we do not believe that there are easy solutions when the frame of these problems is precarization, impoverishment and insecurity. There is instead a hard challenge in which many in Europe are already engaged. For us, the challenge of the transnational strike means to create an organizational weave of connections that would allow us to be ready when the next shake comes. The transnational strike is the action which should anticipate and accomplish what could happen in Spain, what could suddenly happen everywhere in Europe. This means to face the European command assuming the problem of power, so as to avoid to be subjected to choices made by others. SYRIZA brought exasperation within the European summits. We – precarious, industrial workers and migrants – know that exasperation very well. Now the time is come to create the condition for shifting our dismay on Europe: a transnational «NO» full of astonishment.