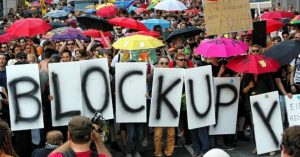 This text is our contribution to the public debate that will take place during the Antiracist Festival in Athens, a moment that we see as a chance to take stock of Blockupy and discuss about its current crisis, even beyond Blockupy itself, starting from the limits that it has displayed in front of the movements that nowadays are crisscrossing the European space.

The result of the British referendum is another signal of the crisis of a process of European integration led uniquely by the logic of austerity and by the undisputed domination of financial capital. This is common sense. Someone enthusiastically welcomed that result as the expression of a workers’ position that has finally found a way to assert itself, albeit through an ‘ambiguous’ nationalism. Others emphasized instead the necessity of a different vision of Europe, even relying on the possibility of crossing its institutions in order to force the social relationship that they express. In front of the so called Brexit, however, social movements must answer some fundamental questions that concern both the direction of the legitimate workers’ refusal of oppression and exploitation represented by the EU policies, and the plausible dimension of our political initiative. Since we stated that Europe is the minimum space of this initiative, it is more necessary than ever to confront with the tensions that crisscross Europe without giving for granted its institutional hold.

We believe that Europe is a transnational political space. Europe is neither confined inside the institutional frame of the European Union, nor coincides with the simple sum of national spaces, as if they could be clearly distinguished from the global dynamics and the social power that constitute them. To emphasize this transnational character means to underscore those dynamics and this power, which systematically cross the borders of single States and reframe their function. The transnational space is constituted by the movements that cross and trouble it – starting from the movements of living labor – and by a logistic apparatus that connects each point through material infrastructures, lines of law, mobile and functional frontiers. By virtue of this objective connection, each place is necessarily crossed by dynamics that are not only local. However, this does not immediately make any local initiative – being it at the city, metropolitan or national level – a transnational one. The question remains open about how to transform that objectively existing connection into an organizational process, one that is fit for putting into communication the insubordination emerging from every point of the European transnational space and for making it a common force of liberation.

Since 2012, Blockupy has been for us an opportunity for moving in this direction. We contributed to its initiative acknowledging it as the sole network that was so audacious as to build up a coordinated European action against the social and financial power of the Union. Starting from this project of opposition against austerity, Blockupy was able to attract collectives, networks and unions from all over Europe, providing them with the possibility of overcoming the limits of the local initiatives. The day of action against the ECB was a powerful moment for expressing this long-standing work of organization, which has been able to target the symbol of the financial domination of the EU and to attack directly «the hearth of the beast». In that moment, and even for those who did not share this experience, Blockupy pointed out the possibility of finding forms of convergence and attack, in order to turn Europe into a battle-field against austerity policies. This propelling and expansive capacity, however, seems to be over. In the final analysis, it was directly proportional to the despotism of the Troika, but it entered into a crisis when the European constitution has been materially questioned by social movements that could not be reduced to the organized forces that converged inside Blockupy. In front of the Greek crisis, of the migrants’ storm, of the French social strike, and of the processes which led to the Brexit, the logic of pluralism and coalition among existing forces and activists’ networks prevailed over the necessity of a centralized expression of the voice and visibility of those precarious, migrants and industrial workers that are experiencing and refusing the everyday effects of austerity in Europe. The incapacity of grasping the ongoing transformations was also caused by the unwillingness to overcome an approach based on solidarity, as if the solidarity with Greece, with migrants, with France was in itself an answer up to the challenge. Furthermore, the choice of generic watchwords prevailed over the urgency of defining a partisan political discourse available for those, even outside the networks of activists, who were troubling the political and institutional structure of the Union. The idea of a polarization between a rich North and a poor South resulted into a crystallization of differences and impeded to see that a European regime of wage is working and imposing a forced synchronization of the conditions of exploitation inside the transnational space.

While it is not able to grasp the complexity of the dynamics and of the opportunities that cross it, the insistence upon a Europe led by Germany produced a retreat towards a national initiative. Thus, rather than deepening the transnational dimension of Europe, Blockupy is eventually focusing on a German mobilization. Beside the slogans, a demonstration against right-wings forces like the one promoted by Blockupy Germany runs the risk of confirming and materializing the national space where right-wings forces grow strong. Once the political initiative is articulated on a national scale, it will not be enough to randomly criticize racism and the social policies of the European Union in order to promote a discourse which is able to establish a material pole of opposition to those of the right-wing forces that must rightly be contrasted. Just like the idea of building a Europe for all, the national initiative is not capable of asking itself who are the different subjects that, outside the narrow circle of activists, cross and move the European space. The absence of a transnational initiative of Blockupy and the national retreat seem to be the signal of the defeat of a specific project of European initiative. The announcement of a possible transnational gathering next spring – which will also be difficult to organize if, as it happened in the last months, the necessity of a transnational organization is conceived only as a support of the national one – cannot erase the national retreat giving it a European facade. We bet too much on the original inspiration of Blockupy as a European movement for not seeing a retreat in what is presented as the necessity of reinforcing local roots. Here, however, the point is not to safeguard Blockupy, to relaunch it or to declare its end. Rather, to acknowledge its limits is necessary for all those who are meditating on how to enlarge transnational processes and practices of insubordination.

Therefore, we must recognize that the challenge that the movements are confronting is the impossibility of thinking the local and the transnational levels either as alternatives, or as a sum. Today, both the territories and the European space must be re-thought starting from the transnational dimension of Europe that we mentioned above, and from the movement of men and women moving across and messing up its consolidated framework. This means that not all the local struggles or initiatives are equivalent, because there are local or national moments whose potential goes far beyond their territories and must therefore be translated into a transnational process of organization. This is the case of the French mobilization, which is neither a simple spark of hope to be glanced at from a certain distance,  nor a pattern to imitate and export, but rather addresses all those who are engaged into the construction of a truly European initiative. On the one hand, the struggle against the loi travail obliges us to recognize the specific lines of fragility of the European constitution: wages, welfare, freedom of movement. These are the same lines upon which the neo-nationalistic forces are building up their campaign, which is paradoxically more European than the one of the movements who oppose it. On the other hand, it is necessary to recognize that the convergence of struggle is neither simply the name of the sum of local initiatives, nor a spontaneous occurrence. In France, «to converge» meant to point at a common political objective, it meant that the demand for a democracy from below, for justice and social rights, and the struggle against police repression found their meeting point in the opposition against the despotism of wage and of the employers. In France convergence has been possible because the social practice of strike became the channel of a constant political communication among different conditions and the watchword that led a mass uprising. The point of convergence of the French mobilization, therefore, goes beyond France, even though the struggle against the loi travail was not supported through explicitly European claims: it can be used by millions proletarians in Europe, that is by the protagonists of a daily fight inside and outside the working places. However, the possibility of turning that point of convergence into a concrete political opportunity of communication and connection beyond the French borders depends on the existence of a transnational process of organization, able to be visibly and decidedly activated where the contradictions of the European constitution blow up. In order to turn the European crisis into the opening – rather than the closure – of spaces of freedom, in order to turn the social strike which overwhelmed France into a transnational practice, it is necessary to take up the challenge of a «convergence» that could firmly put at the core of our initiative the ambitions and pretensions expressed by precarious, migrants and industrial workers everywhere in Europe: the pretension of having a wage which is not decided by the bosses’ arbitrary will; the pretension of having the security of healthcare, housing and pensions regardless of one’s own labor contract; the pretension of moving without limitations and blackmails, whatever nationality is written on one’s own documents. In front of the tremors that are shaking Europe, in order to avoid the false alternative between the defense of a Union led by the European Commission and the neo-nationalist solutions, today it is necessary to speak outside the narrow borders of the movement organizations and trace the path of a common direction for expressing the refusal of oppression and exploitation which precarious, migrants and industrial workers, in different ways, are practicing everywhere in Europe. It is necessary to trace the path for a continuous accumulation of power. 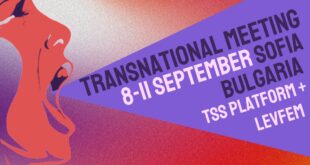 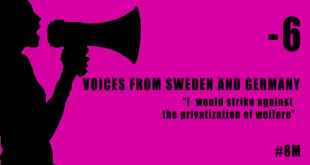