The occasion of a «no». On the critique of debt-democracy 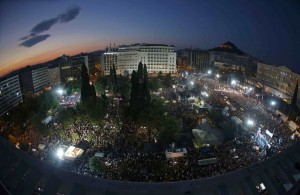 How many «no» can be said on Sunday? What kind of occasion the Greek referendum against the ultimatum of the European institutions offers? The referendum was an obliged choice, because in the last months a true and proper pro-slavery revolt occurred against the Greek attempt to escape the tyranny of the debt. The European élites – the institutional, economic and media élites, both conservative and socialist – united in order to prove that this attempt is technically unsustainable, but also and most of all politically unacceptable. Those who are subjected to the debt should remain in their place and accept the conditions of wage and income that are imposed by the now rediscovered «natural laws» of capitalism. The weeks before the announcement of the referendum have been characterized by the increasingly flagrant and vulgar attempt to delegitimize the claims that the Greek government ventured to bring into the negotiation. The European and global character of the Greek referendum does not concern the dispute between Greece and the rest of Europe, but the attempt to give a general lesson to those who believe that they can oppose the tyranny of finance. What is at stake now are neither billions of euros, nor the name of the currency that will record debts and sacrifices. What is now at stake is the power of deciding in favor of those who are paying the highest price of the crisis.

On this level, which is entirely political, Greece is not an exception, as it is usually described. Greece is one instance among others. The difference does depend neither on the amount nor on the sustainability of its debt, but on the fact that in the last months Greece seized the occasion to say «no» to austerity policies. The referendum is the occasion to repeat this «no». The repeated unwillingness to undergo these policies is even more important than the form of its occurrence. The legitimacy of this claim of not being subjected to austerity does not depend on the numeric majority of an imaginary thing called «the people». The victory of the «no» is not scaring because it could reactivate a belief into democracy, but because it would impose a level of negotiation which is considered as abnormal. It is not by chance that the ineffable Mr. Schäuble, with his usual brutal straightforwardness, already clarified that an agreement would be anyhow difficult, when not impossible. Yet, the victory of the «no» would decide on which scale the whole question will be articulated. A question that until now has been confined within a Greek and European level would suddenly become global because – differently from what occurred in Argentina on 2001 – today we are not simply confronted with the default of one single State. Today, the risk of a default concerns many States. In order to avoid falling or being thrown down into that abyss, the rules imposed by a power that nobody can ever wholly determine must be accepted every day. That is why millions of people recognize the destiny of the Greeks as their own possible destiny. Consequently, millions of people may regard the victory of the «no» as their own possible victory in the future. The almost obsessive stubbornness with which the Greek mediators continued to say that an agreement was approaching is remarkable. And they are continuing to do so, when they announce that the agreement will immediately follow the referendum. This strategy aims to interrupt a communication that would otherwise be unilateral, because up to now the European authorities did not really negotiate, but simply dictated the conditions of the Greek capitulation. Thus, the Greek strategy legitimate the presence at the table of negotiation of an unexpected part, while at the same time it threaten with the activation of a subject which is latent not only in Greece, but also in the rest of Europe. This possible and unexpected presence also justifies the sure loss of the billions of euros lent to Greece. And the true problem of the Troika is precisely to avoid that presence. Now the point is not any longer the debt or the way in which it is calculated, but the way in which it can be imposed as an irresistible political obligation. Debt is not an economic magnitude, but the form of the political command exercised over millions of men and women, beyond States and borders.

After all, it should be clear for everybody that the so-called Greek people does not exist. Some recognize themselves into the projects of the Troika, because they can take advantage from them or because they simply consider those projects as the guarantee of a necessary and immutable order. It is not new that domination usually reproduces itself through the dominated. Others, who suffer this domination, lined up with SYRIZA, not because they do not have anything to lose, but because they know that, in the damned case that «yes» wins, the unlimited arrogance of capital will impose on them the highest price. However, not even they are the Greek people. They are not the 99% that, on a practical level, reveals itself as a promise which is so much reassuring as improbable. They are one part – our part – which appears as a complex multitude of material positions, hopes, fears and passions. This part cannot be represented, it can be only affirmed. The political act of the Tsipras’ government was that of defending this part, by taking it away from a domination which claimed to be undisputed. This is what we have defined and we continue to define a class use of financial instability. The couple Tsipras-Varoufakis cannot be forgiven for this sin, which does consist neither of the scarce consideration of accounting and financial compatibility, nor of the indiscipline exhibited on the media, nor even of the disregard of the established diplomatic customs. The sin that cannot be forgiven is that during negotiations they asserted the position of those who were not expected, desired and even tolerated.

On these days, often with the most questionable intentions, many words are wasted for the sake of remembering that Greece is the native land of democracy and even the origin of the Western civilization. Both these statements are contestable and perhaps they are not even desirable. Such a genealogy of democracy and civilization would be useful just in the case we disclose the funny and silenced irony of the myth according to which Europe was kidnapped by Zeus in the East where she lived, so that Europe has an extra-European origin. However, Greece is not the past that we have to cherish, but the evidence of a present which concerns all of us. That is why we are all concerned when Greece challenges democracy as a global system of domination. If democracy becomes the political form of financial tyranny, the Greek referendum is not a reactivation of the lost original characters of democracy. Rather, it is a new challenge which is up to present times, when debt is a widespread political form able to impose the regime of wage, break social bonds, and impede whatever communication is not mediated by money. The referendum publicly unveils the interlacement between financial tyranny and democratic representation, and it runs the risk of breaking the intimate link which nowadays keeps them united. The referendum is not the direct expression of an ethereal Greek people, but the occasion of practically refusing democracy as the political form of the tyranny of the debt. One of the effect of the crisis was that of consolidating and legitimizing a normative order that the agencies of transnational governance are seemingly called to simply administer. This political operation was subtle and unthinkable from some points of view. Today, the rules and the institutions that caused the crisis are the only ones that can legitimately decide what can be or cannot be done in order to live in  the crisis or overcome it. We are confronted with a financial transnational tyranny which is justified by finance itself and is able to impose an unprecedented global domination. This domination seems to be ubiquitous, adamant and, most of all, indisputable.

On next Sunday, in Greece, there is the occasion to say «no» to this domination. We must seize politically the occasion of this «no», knowing that it can undermine a fragile European constitution based on the vanishing sovereignty of all of its State and on the likewise uncertain sovereignty of the Union. The «no» of Sunday can open a way through the steady neoliberal certainties of the European governance. It would be a serious blow for a representation which is by now simply asked to democratically legitimize the tyranny of the debt. For all these reasons, what is contradictorily happening among great difficulties is neither the reaffirmation of a vanishing sovereignty, nor the extreme resistance of a people. Rather, we are in front of a revolt against the tyranny of finance, knowing that there is not a space free from its domination, whose global character radically redefines the possibilities and conditions of those claiming to radically oppose it. This is a completely new situation, in front of which it is useless to hang out at the cook-shops of the past or to run through the centuries in search for analogies. The Greek one is the first revolt against the debt which runs over and forces the State institution towards the direction it imposes. We are now obliged to regard the social movements as a practical critique of the democratic institutions, because Europe is forced to mirror itself into the insufficiency of the State, thus recognizing its own insufficiency. In this complex configuration of powers, the democratic system of domination runs the risk of being unable to manage the situation at the very moment it calls for a democratic decision. To seize the occasion of the «no» means to introduce a deadly element of uncertainty into a system that is able to appreciate the risk only when the risk concerns those who are below. This is the occasion when a multitude crisscrossed by manifold differences can raise its head and impose its «no».