Blockupy meets Amazon Strikers: a moment of mutual infection in front of the gates

by HAGEN KOPP (from No Troika Rhine Main) 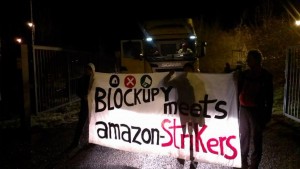 At 18th of Dember 2014 a small Blockupy delegation met with the Amazon strikers in Bad Hersfeld, in this time one of the six Amazon branches in Germany with about 2300 striking workers in total. The Blockupy activists supported the protests at the gates of so called FRA 1, one of the two huge ware houses in the city. An article of the press agency Reuters summarized the background of this repeating union coordinated strike. Here, a field report from the gates and about some nice moments of solidarity and mutual infection.

A first informal meeting had already been held in Bad Hersfeld in the evening before with a group of the strikers who had just returned in high spirits from the city of Koblenz. At this Amazon branch, workers had for the first time joined the strike coordinated by the service union (verdi) and busses from the other striking branches had been gathering in Koblenz in support: two busses of workers joined from Bad Hersfeld, in total more than 1,000 strikers from six of the german Amazon branches came together in Koblenz for an impressive common manifestation and exchange. Inspired by this a vivid talk took place to prediscuss the next afternoon strike manifestation in front of the gates in Bad Hersfeld. How many strikers would join? How many would stay for longer time and participate in the activities at the gates?

Apart from these considerations, a first discussion was also held in this evening about the issue of participation by the Hersfeld Amazon workers in the protests of 18.3.2015 in Frankfurt on the occasion of the opening of the European Central Bank. After a short introduction of the Blockupy delegation, an initial discussion took place about the lines of communication between the struggle against the crisis regime and the struggle of precarity workers. In this talk some colleagues framed their strike in the context of a wider struggle against the strategies of exploitation and the proposal was made at the end to come from Bad Hersfeld to Frankfurt at 18th of March, at least with a bigger delegation and ideally with a full bus.

Next day at 5.30 a.m. two supporters joined the strike picket in front of the gate of FRA 3, the second big Amazon warehouse in Bad Hersfeld. The morning picket with about 10 strikers is a kind of information point: with some union flags, a music box and distributing leaflets for the strike to the shift-starting workers. Between 2 and 3000 workers are employed in both warehouses in Bad Hersfeld, many of them with temporary contracts and thus in a social situation almost impossible to join a strike. Some of them show solidarity by sick notes, and we learned, that in general the number of employee’s illness is very high due to the working conditions: sometimes even 25 percent of workers are ill. And it is not a surprise, if you know that amazon pickers have to run 20 km and more per shift.

The participation increased from strike to strike – now about 600 workers are on strike in Bad Hersfeld – but a majority is still working during this new strike. Thus hundreds of workers, although partly open minded, crossed the picket line this morning to start their shift, it seemed to remain very difficult to put pressure to this global player and its machinery.

But another picture in the afternoon: as of 2 p.m. up to about 400 workers gathered, at the change of shifts, in front of the gates of warehouse FRA 1 and formed protest rows at the entrance ways (see first photos below). At about 5 p.m. there still were around 100 strikers in front of the gates and the so-called «informative talks» with the drivers of the «Cut Offs» (departure of trucks) started.

This because it had meanwhile been achieved, that the departing truck drivers could be stopped at the entrance gates for 15 minutes in order to be informed about the strike. The police was present with only a few officers and anyway overburdened and now tried to ensure that the 15 minutes were not exceeded and the informative talks did not turn into longer blockades, as the trucks are an essential part of the Amazon Just-in-Time chain and each delay can immediately entail further delays of deliveries.

In this respect the Amazon management was on permanent feverish stand-by on the site and tried – at first at 5 p.m., it was already dark – to make the trucks leave the premises unnoticed by a rear exit and an asphalt country road. But it was noticed by the strikers, and a small group of them and Blockupy supporters could stop it immediately as they refused to leave the street. One truck now stood almost one hour before and at the gate without being able to move and the country road was moreover blocked by a private car «that had been parked there by coincidence». The Amazon management had to give up with the idea to use a rear exit.

Simultaneously the mood at the two major entrance and exit ways was getting better and better. In the further course of time a truck tailback was building up on the premises, also because the 15-minute informative talks with each truck driver were often creatively prolonged. Strikers and supporters refused to leave the street in the ordered time or moved very slowly, the police officer was confronted with ignorance or disobedience. Banners were used during this kind of blocking actions – among one by Blockupy – and a short fire show by Tanz, kleines Leben/dance, little living in front of the central truck departure way raised the spirits (see more photos below) and made the manager of this Amazon branch get more and more nervous and feverish. Until around 8.30 p.m. the cat-and-mouse game in front of the gates continued successfully, and in conclusion the participants agreed that thus the course of Amazon deliveries had been brought out of rhythm more effectively than ever before…

For this day the gathering of strikers and supporters (not only the Blockupy delegation, but also further activists from Frankfurt, Kassel and even singular persons from Hamburg and Bremen) was very positively assessed and in the joined action and discussions mutual trust was built up. This can and should get a follow-up and the connections between Amazon workers and Blockupy should be extended at further strikes, as well as on 18.3.15 in Frankfurt! This is what was promised to each other again at the warm parting in the late evening  on the basis of a new and concrete experience in this afternoon in front of the gates: a first moment of mutual infection, which has to be continued… 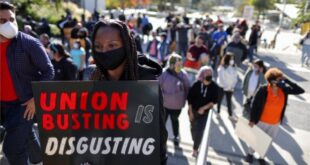 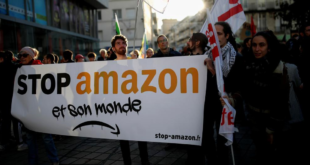 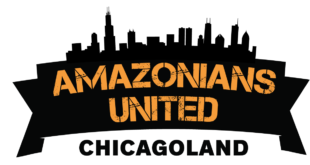 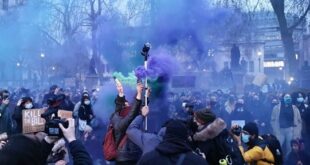