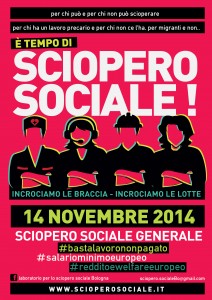 On November 14th Let’s Strike Back Against the Precarization of Labour and Life!

On November 14th, we, precarious workers, migrants, industry and public sector workers, students, autonomous workers, men and women, will strike against the condition of subordination which the labour regimes and the European policies want to impose on us. November 14th will be for us a social strike, a strike that should be general and generalized, precarious and metropolitan: a first experiment for the struggles to come.

It is clear to us that we are facing transnational dynamics and that Europe is the minimum space of confrontation in order for conflicts to be incisive. What is now called crisis is the radicalization and reorganization of production and neo-liberal policies, known as ‘austerity’, which have reshaped the European scenario. These are sustained by the attack on wages, the compression of trade union rights, the deskilling and the corporatization of education and research, the privatization of public utilities, the enclosure of the commons, the new government of mobility of capital and workers, and the exploitation of migrant labour. From Italy to Greece, from Spain to Poland, from Germany to France, Europe has become a field of precarization of labour and impoverishment that goes beyond its own borders.

On November 14th we will start to organize our strike back against this condition, to claim a European minimum wage, a new European welfare and basic income for all European citizens and migrants, the right to housing and free access to education and knowledge. On November 14th, these claims will echo across Europe! In fact, building connections and communication across the European space means not only to articulate present struggles and programmatic demands, but also to imagine processes and claims that recognize Europe as our common battlefield.

During the open assembly called by Blockupy International Coordination in Brussels, the 14th of November has been discussed as one step, between others, to go on with commons days of action and mobilization. Various initiatives are already planned in several European countries. As “Italian Strike Meeting”, we call all groups and movements to join this effort and to be part of the Social Strike on November 14th: let’s make this day the first step to combine the different forms of struggle and strike that have been experimented and to invent new ones, which are potentially capable of expanding on a European and transnational scale!