Infiltrators in the world government of migrations: the refugees’ strike in Israel 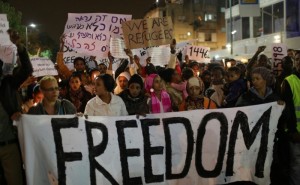 The mobilization of migrants in Israel is growing. After three days of general strike launched by the movement, a demonstration is now in front of Knesset, the Israeli Parliament, to ask the Prime Ministry Netanyau and the Interior Ministry Gideon Saar for concrete answers. Mobilization was started by asylum seekers and grew up in the last weeks after the enactment of a law that allows the imprisonment of those who are stopped by police and found without a regular visa. The Israeli politics resembles the one of Saudi Arabia, where clashes and hard protests happened about one month ago. However, the hunting of migrants – an activity organized by public authorities with the support of police forces – was opposed by the resistance organized mainly by Eritrean and Somalian people. In December, after the approbation of the law in question, dozens arrests took place and hundreds people have been stopped and asked to go to Holot, a recently open detention center. Holot should become the biggest detention center for migrants in Israel, a true and proper prison that could contain thousands people. This fact points out the dimension of migrations in this area which – from many points of view – is still one of the main transnational laboratory for the government of migrations and of the borders.

Protests started and grew fast till the huge demonstration of January the 5th, when the three days strike was declared. The call was simple: «stop working». Arguments were simple too: «we strike to say Israel that all imprisoned refugees must be freed and to stop this politics. We believe that this strike will point out our importance for Israeli economy and will force them to change their politics». The strike determined a new quality of migrants’ mobilization. First of all, it changed the perception of the movement: though migrants appeal to the UN convention for refugees’ right, they decided to use their condition of workers as a weapon. Even though the law does not allow them to work, thousands migrants are employed illegally, particularly in restaurants, coffees, hotels and cleaning services. Second, the strike enlarged the meaning of the mobilization, since it pointed out the possibility of using the power of migrants as workers, thus overcoming the borders of the debate around asylum rights. Being in a great difficulty in front of thousands asylum applications, the government reacted hardly, charging the workers with the accusation of being «African infiltrators» and their employers for their support in giving them illegal jobs. Many employers defended migrants saying that they are «good workers»: a «humanitarian» declaration which cannot hide the profits made through the exploitation of illegal labor. That is why the speakers of the movement laugh of the dirty game of government by stating that they are not striking against the employers, but against the government itself. In this way, they used their power relationships within the working places to oppose the legal regime which condemn them to illegality, and they go beyond the field of industrial relations with a political use of the strike. Against the public representation of migrant asylum seekers as weak subjects whose existence is permanently marked by war or by misery, this mobilization is showing a force which is not defeated by the economic blackmail and is able to overcome it. Many declared that they know that a permanent strike could damage them reducing their income, but this will not stop them. Beside the demand of an acknowledgement of the status of refugees to thousands men and women, the protest faces the question of the institutional racism experienced by migrants in Israel, something which resembles the situation of many other States: «they forces us to go to the Interior ministry offices for the visas, we have to wait for hours in long queues, then they refuses the visa and, once you are in the street and they stop you and you don’t have a visa, they imprison you». Appealing their refugees status and the international conventions is a strong argument on the demonstrators side. The strike of migrant labor, however, points out stronger possibilities and the limits of a separation between refugees and other migrants, a separation produced by the transnational government of migration enacted also by the Israeli State. Calling for their right of asylum in front of a State who refuses to acknowledge that right, refusing detention and striking, the movement of migrant asylum seekers in Israel is questioning the same principles to which it is appealing. It would be wrong, therefore, to judge this mobilization from a humanitarian point of view.

In the meanwhile, the mainstream Israeli press is stating that in some coffee shops the service is slower, but the system was not stopped. However, the strike points out all the possibility of a movement addressed against the global government of migration and the institutions which grant it. The empowerment of these possibilities is the challenge that we have to face in Europe too. 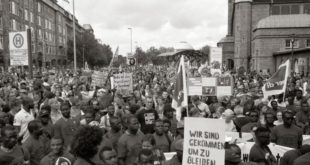 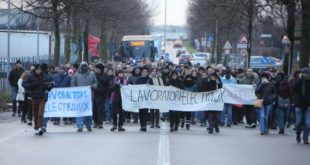