Blockard from Frankfurt. It was worth it being here 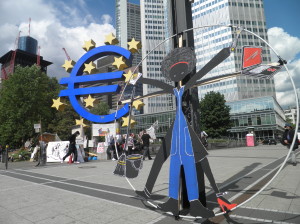 «There’s no more money here in Frankfurt», a comrade told us at the end of the march. It seems that even in the outer parts of the city the banks are closed, worried about the arrival of demonstrators from all over Europe. Despite the methodical actions of the police against the mobilization in the first two days, Saturdays demonstration leaves no doubt on who won the confrontation. The police speak about 25000 participants, but we know that numbers are not the only political measure of this event, as strong as they may have been on Saturday. The German comrades won because, despite the doubts of some, they succeeded in organizing three days whose importance goes beyond the borders of Europe.

There are different memorable images from the march. Above all, its compactness. Despite the diversity of its political composition, from the extra-parliamentary and autonomous left to organized labour, on no moment was there an attempt to «isolate» the more antagonist blocks of the march. Hundreds of police in riot gear «escorted» entire parts of the demonstration, walking in indian file, attempting to enter the demonstration addressing those demonstrators considered most dangerous, a common German police tactic, which easily comes across as a provocation. Every time this happened, however, the demonstrators response was unanimous. Those who were advancing turned back, called back by rapid word of mouth communication, while the police blared from their loudspeakers: «demonstrators, you are going in the wrong direction». Indeed, we did.

The political significance of this image is strong. The organizational process that brought to this event was not limited to the creation of alliances, or to the planning of an eruption of anger to oppose to the so called financial dictatorship of the EU. The effort that was undertaken was instead to enlarge the space of visibility and protagonism of those who – even in the richest country in Europe – oppose the sovereignty of money.

This was one of the reasons why #Blockupy Frankfurt was able to create a truly transnational space. Transnational because people came from every European country to express their rejection of exploitation and precarization, which are being strengthened by the higher levels of the Troika. Transnational because it learned frame experiences from outside Europe, learning from some of the protagonists of the Arab spring or #Occupy Wall Street. Transnational because it put migrant struggles, against the border regime and for the freedom to move in and out of Europe, at the center. Transnational because it did not choose, as happens elsewhere, the German and European political system as its reference point, thus avoiding that its convulsions become the measure of its actions. «The bad» was here called by its true name: capitalism. The signal was given to the possibility of a new, open and expanding struggle, whose potential goes well beyond this single event.

There was anger, and a lot of it. The absence of clashes did not denote a lack of autonomy or of radical priorities, but exactly the opposite. Here thousands of men and women succeeded in denying any ex post legitimacy to the police governing of this event. And this goes well beyond the frame of political movement in this country, because from the Chancellery precise indications could have been given to all other EU countries; instead from today onwards it will be a bit more difficult to oppose the struggles of migrants and precarious workers «by any means necessary». It was worth it being here. 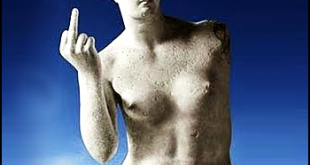